Occasionally — but only occasionally — the political pantomime that is parliamentary question time throws up something interesting. Yesterday, NZ’s deputy prime minister Bill English managed to dig himself into a drought-ridden hole, only to emerge looking like a climate denier. Green Party co-leader Russel Norman tried to get English to expand on his earlier comments that the government would not be able to help farmers hit by increased incidence of droughts, which led to this astonishing little exchange [Hansard transcript here]:

Dr Russel Norman: Does he agree with the Government’s own research body the National Institute of Water and Atmospheric Research (NIWA) when it states: “Droughts are projected to become more frequent and more intense under climate change.”?

Hon Bill English: I would not want to question the scientific effort that has gone into that, although there is always uncertainty about these predictions. I recall similar predictions made by similar scientific bodies in Australia just 4 or 5 years ago and it has not stopped raining since.

Astonishing stuff. English gets the uncertainty issue completely wrong1, and then manages to insult Australians who have been suffering through their hottest summer ever. Here’s a little chart from the Aussie Climate Commission that he might find helpful. 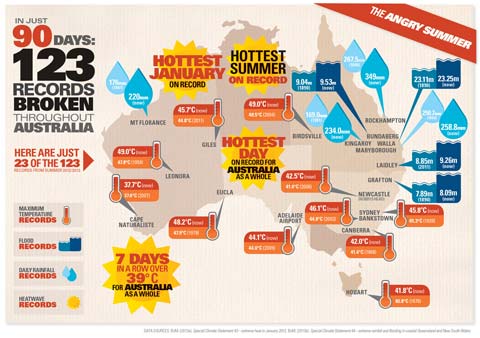 This is what NIWA has to say (pdf):

The most likely scenario sees farmers in most North Island regions, as well as those in eastern regions of the South Island — especially Canterbury and eastern Southland – spending 5-10 per cent more of the year in drought by the middle of this century. This means that if you spend an average of 10 per cent of your time in drought at the moment, by 2040, you might expect to spend as much as 20 per cent — although this figure will naturally vary from year to year.

Throughout the exchange with Norman, the deputy PM seemed extremely loath to use the words “climate change”, and instead made extensive references to cycles and weather patterns. In a later supplementary question, Norman asked him if he accepted that “human-induced climate change is real?”

Hon Bill English: It may well be, but I am not sure what that has got to do with this particular question.

Weasel words, at best. English wants to ignore the clear advice the government is receiving from the Crown Research Institute tasked with studying the issue, and can’t bring himself to directly accept the reality of anthropogenic climate change. You’d think it would be a simple matter for a senior politician to take reality at face value and act accordingly, but that seems be something that English and his cabinet colleagues find difficult in lots of areas…