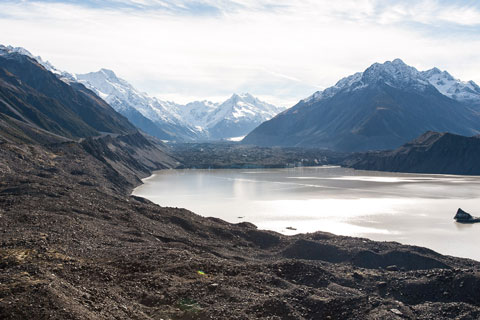 Yesterday morning I climbed up the short track on the Tasman Glacier terminal moraine to the lookout, and was amazed by how much the glacier’s calving front had retreated compared with my last visit to the same spot, back in February 2008 (below – click on either picture to see a bigger version). Across the full face of the glacier there’s now a sheer cliff, where large bergs calve into the growing lake — the most recent, back in February, being rated as the largest ever. 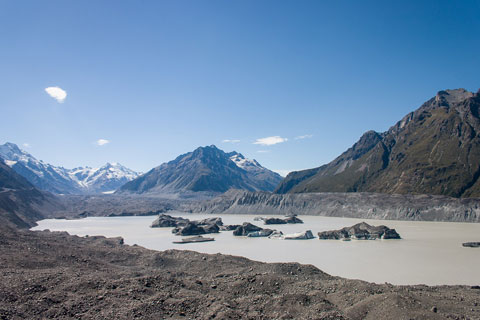 Both pictures were taken from the same spot, but with different cameras and lenses, so a direct comparison isn’t possible, but it should be clear that the glacier front has retreated up the valley significantly over the five years. Given the dramatic scale of the landscape (those are 3,000 metre peaks up valley) it’s hard to estimate distances by eye, but recent rates of retreat have been estimated to be 400 to 800 metres per year. Glaciologist Mauri Pelto has a detailed analysis of the glacier’s recent history at his blog From A Glacier’s Perspective here.
Similar rapid rates of retreat are being seen on the nearby Mueller and Hooker glaciers, both of which have large and growing terminal lakes.

One message got home to me: rapid climate change isn’t something that happens to other people, or to other parts of the world. To see New Zealand’s largest glacier so visibly diminished in the space of a very few years brought home the reality and scale of the problem we face in a very direct manner. Sometimes we need to step away from our computers and see what’s happening with our own eyes…