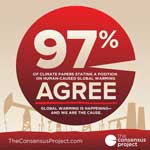 So Cook et al1 confirms that there really is a consensus in climate science: 97% of the peer-reviewed literature over the last 20 years supports the fact that humans are responsible for the warming. It’s a solid result, confirming the earlier work of Oreskes and others, but its importance lies in the fact that public perceptions of that consensus lag behind reality. As John puts it:

Quite possibly the most important thing to communicate about climate change is that there is a 97% consensus amongst the scientific experts and scientific research that humans are causing global warming. Let’s spread the word and close the consensus gap.

Indeed. Count this as my small contribution. Meanwhile, another recent paper very nicely demonstrates that the existence of a consensus on the basic facts of warming does not mean that scientists have to agree about everything.

A letter by Otto et al in Nature Geoscience discussing estimates of transient climate sensitivity2 has been hailed as suggesting that near-term warming might be slightly less than expected. Unsurprisingly, this has been seized upon by the usual suspects as evidence we don’t need to do anything, but the paper really contains little to gladden a sceptics heart. Here’s Myles Allen (one of the authors of the paper) in the Guardian:

…at face value, our new findings mean that the changes we had previously expected between now and 2050 might take until 2065 to materialise instead. Then again, they might not: 1.8C is within our range of uncertainty; and natural variability will affect what happens in the 2050s anyway.

There’s plenty of room for debate within the climate science community about the new paper’s findings and methodology3, at the same time as there’s an overwhelming consensus about the bigger picture. That’s science in action. But transient climate sensitivity is a highly technical metric, and as Allen points out, not really very relevant to working out what to do about climate change. We have a a very good idea about the planetary carbon budget, and we know we have to cut emissions — the sooner the better.

The bigger picture — one that’s missed in technical debate, and in the communication of a fairly conservative consensus — is that our experiment in planetary geoengineering is already running out of control. The rapid loss of Arctic sea ice shows no signs of slowing down, and is well ahead of even the most aggressive model predictions. We can already detect significant impacts on northern hemisphere weather patterns.

Long before we reach CO2 doubling, the Arctic will be ice free all summer and the northern hemisphere climate will have changed beyond anything experienced in the history of humanity. Now that really is policy relevant, and it needs to be communicated with considerable force…