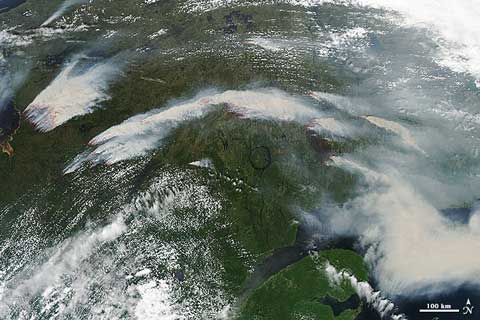 Massive forest fires are raging beyond control in Quebec, sending huge plumes of smoke to the east. The Eastmain fire — top left in this image from NASA’s Earth Observatory — is spreading towards the east coast of James Bay, the southernmost extension of Hudson Bay, and is currently estimated to cover an area of 656,000 hectares (1.6 million acres). Smoke from the huge fires has already caused smog problems in Montreal and Maine, and is heading round the globe. On July 8 NASA’s Terra satellite spotted a great swathe of Canadian smoke crossing Norway and Sweden, and heading across the Baltic towards Finland. 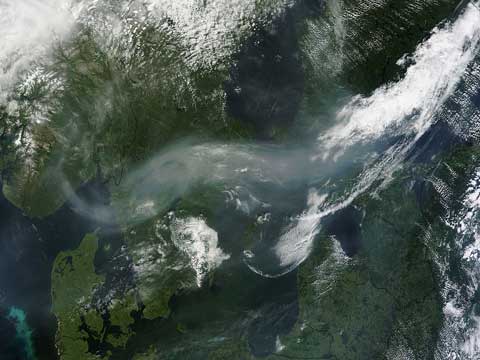 The Eastmain fire is the largest wildfire in Canada since 1959, and is almost as big as all the wildfires that have burned in the US so far this year. Forecasts for the area show warm temperatures continuing for at least another 5 days, so the fire is likely to continue to spread.

Meanwhile, up on the Greenland ice sheet, Jason Box, Peter Sinclair and the Dark Snow team, who are investigating the effect of smoke particles deposited on the ice on melting, have successfully completed their first sampling mission. It’s well worth checking Sinclair’s blog for frequent updates — and lovely images — of the team’s progress.

[Update 14/7: Jeff Masters posts on the Canadian fires here, and a European team track the smoke in near real time.]