Looking down on the North Pole from satellite, NASA’s Arctic mosaic image for July 14 shows an unusually cloud-free view of the sea ice covering the Arctic Ocean. Click on the image to see the bigger original, and to zoom in on interesting regions. So far this year the sea ice melt has lagged behind last year’s record-setting performance, but in the last few weeks the rate of melt has increased significantly and the two years are moving closer together. 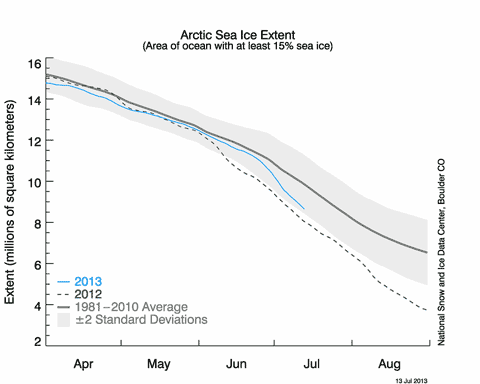 The NSIDC’s sea ice extent graph (above, for July 13) clearly shows the increase in melt, but there is still a substantial gap — over 0.5 million km2 — between the two years. This is, however, the time of year when the melt season goes into overdrive, with sunshine pouring energy into the Arctic 24 hours a day.

Weather has a big part to play in how the rest of the season will play out, and conditions favourable to rapid melting — such as the sort of cloudless skies we can see over the Beaufort Sea1 — could see 2013 close the gap even further. Not possessing a crystal ball, I can only look at the long range forecasts issued by the European Centre for Medium-Range Weather Forecasts (ECMWF) and see what it suggests might happen.

The ECMWF publishes forecasts for up to two weeks ahead2. At the time of writing, these show the high pressure system bringing the cloudless skies over the Beaufort Sea declining slowly towards Canada, and by the end of the week a large cyclone (low pressure system) sets up in its place. In previous years, cloudy low pressure areas would have been expected to slow the melt, but a persistent cyclone earlier this year appears to have caused extensive fracturing of the ice — note the very broken up ice close to the Pole. A late season cyclone also contributed to 2012′s record ice loss.

The ice in the Beaufort Sea is certainly melting — the satellite image shows the ice surface tinged blue, a clear indication that surface melting is well under way. The NSIDC’s sea ice news for June noted:

…thin ice north of Alaska in the Beaufort and Chukchi seas, ranging from 1 to 1.5 meters (3 to 5 feet) in most areas and as low as 0.5 meters (approximately 2 feet) in others.

If the ECMWF forecast is correct and a cyclone develops over the Beaufort Sea next week, we could be looking at another period of extremely rapid ice melt. Will it be enough to enable 2013 to rival 2012? Far too early to tell3, but this is the time of year when the state of the ice becomes really interesting to follow.

It might take a few months for the drama to unfold, but drama it most certainly is. The future of the planet is being written in the Arctic Ocean by the sun and the warming waters, and we get to watch.

[As ever, I strongly recommend following Neven’s Arctic Sea Ice Blog for the latest news and commentary on the progress of the melt season. Neven also maintains a very handy page of just about every graph and data source on the Arctic ice.]