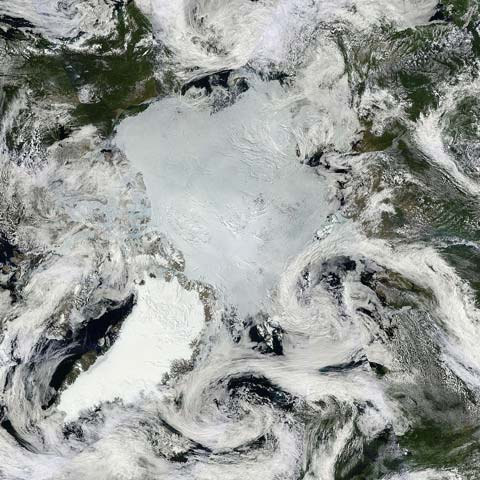 Reading this press release about a new paper in Palaeogeography, Palaeoclimatology, Palaeoecology spoiled my day. It might not be obvious to a casual reader just glancing through the morning news — but a couple of paragraphs leapt out at me:

Ballantyne’s findings suggest that much of the surface warming likely was due to ice-free conditions in the Arctic. That finding matches estimates of land temperatures in the Arctic during the same time. This suggests that atmospheric carbon dioxide concentrations of 400 ppm may be sufficient to greatly reduce the spatial extent and seasonal persistence of Arctic sea ice.

In other words, losing Arctic sea ice brings huge warming to the lands around the Arctic Ocean. This is extremely bad news for a number of reasons:

This should be headline news. It should be plastered all over the front pages of newspapers and web sites around the world. TV pundits should be demanding action from the politicians who have put action on emissions reductions in the “too hard” basket. The evidence is beginning to suggest that Wally Broecker’s angry beast, fed up with being prodded with ever bigger sticks, is going to bite back hard — and bite back soon. Is there time to stop all this happening? Perhaps — but it will take a huge effort, a wartime response when the world is being led by billionaires, ideologues and their appeasers intent on denying reality. We’re sleepwalking to disaster. By the time we wake up, it will be too late.

[If we don’t do something it’s curtains]