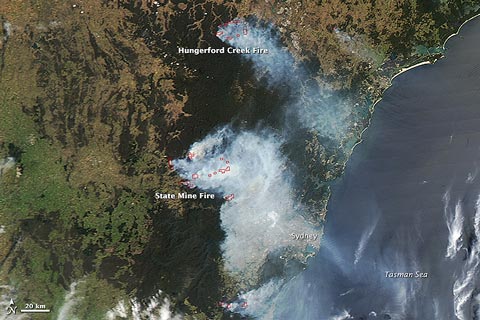 Smoke from the bush fires burning in the Blue Mountains blows over Sydney in this NASA Earth Observatory image captured yesterday. The scale of the fires and their impact on the skies over Sydney and much of New South Wales is prompting much discussion in Australia about the link between weather, climate warming and wildfires, and bringing international pressure to bear on new PM Tony Abbott’s plans to scrap carbon pricing. Here’s researcher Roger Jones, writing in The Conversation:

We found that fire danger in Victoria increased by over a third after 1996, compared to 1972-1996. The current level of fire danger is equivalent to the worst case projected for 2050, from an earlier analysis for the Climate Institute.

While it’s impossible to say categorically that the situation is the same in NSW, we know that these changes are generally applicable across south-east Australia. So it’s likely to be a similar case: fire and climate change are linked.

This early start to the fire season comes after a year of record warmth in Australia — the hottest summer on record, the hottest 12 month period (to September), and it’s looking odds on that calendar 2013 will be the warmest on record. NSW also had its second warmest winter on record, which helped to dry soils out more than usual. With summer still a month away, the prospect for SE Australia’s fire-prone states looks grim.

For historical background on Aussie bush fires, see this overview from Weather Underground expert Chris Burt, and keep up to date with excellent analysis at The Conversation by following the NSW bushfires 2013 tag.

[Update: For pithy comment, do not miss today’s First Dog On The Moon1. ]