Over the weeks since the release of the first section of the IPCC’s Fifth Report, the Heartland Institute — the Chicago-based extreme right wing and free-market propaganda outfit that has done so much to promote climate denial — has been trying to get media traction for its latest Not-the-IPCC report (NIPCC: the Nongovernmental International Panel on Climate Change), Climate Change Reconsidered 2: Physical Science. Heartland describes CCR2 as…

… an independent, comprehensive, and authoritative report on the current state of climate science.

The truth is somewhat more prosaic. CCR2, like its predecessors, is an extended effort in cherry-picking and misdirection designed to demonstrate that, as Heartland puts it:

…the human effect is likely to be small relative to natural variability, and whatever small warming is likely to occur will produce benefits as well as costs.

For a detailed take-down of the NIPCC’s main arguments, take a look at Graham Wayne’s Notes for Educators, prepared as a response to an effort by Heartland to push CCR2 to schools in the US. Wayne notes:

The NIPCC report is akin to a confidence trick. It is pseudo-science, badly presented, made difficult to assess or check, and depends on ‘blinding the reader with science’ that may look credible until you actually try to verify those claims against the peer-reviewed published literature.

Climate statistician Tamino was equally unimpressed, suggesting that the NIPCC would be better designated the ICP – for Intentional Cherry-Picking in service of a predetermined conclusion.

My interest in the latest NIPCC “report” was piqued by the discovery that Don Easterbrook, the retired geologist with a long track record of misunderstanding and misrepresenting the Greenland ice core temperature record, was the lead author of chapter 5, Observations: The Cryosphere [pdf]. The NIPCC is clearly not blessed with an overabundance of qualified authors if they have to rely on Easterbrook as an expert on the cryosphere. Worse, his co-authors are two other retired geologists with little or no domain expertise: Cliff Ollier from Western Australia, and Bob Carter, a marine stratigrapher and all-purpose climate denier who never saw an argument against warming that he didn’t like1.

My first reaction to a quick skim through the chapter was pretty much the same as everybody else: this was cherry-picking taken to an extreme. To make sure that I was on the right track, I asked two real ice experts — Greenland maven Jason Box, and glaciologist Mauri Pelto — to take a quick look. Their reaction was scathing.

Multiple independent lines of observation from satellite, aircraft, and ground surveys indicate a strong imbalance of land ice that results in the observed increasing rate of sea level. Easterbrook and co-authors lie about this fact among many others in the NIPCC report’s shameless mockery of earth science.

Pelto: Twenty one consecutive years of global mass balance loss and the disappearance of so many glaciers, is hardly natural. See World Glacier Monitoring Service reports.

Pelto: This is hardly borne out by Howat and Eddy (2011, pdf). “We find that 90% of the observed glaciers retreated between 2000 and 2010, approaching 100% in the northwest, with rapid retreat observed in all sectors of the ice sheet.”

So far, so bad. But what about Easterbrook? His fingerprints are all over several sections of the chapter, and many of the graphics. For example, Figure 5.12.1 (p709) bears a striking resemblance to earlier Easterbook efforts: 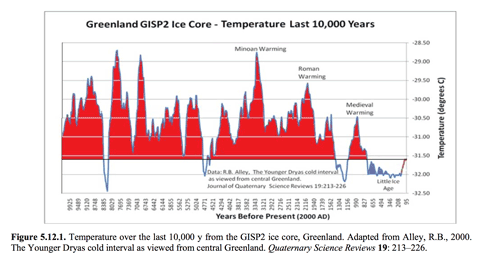 I first encountered that graph in an article of Easterbrook’s — Magnitude and rate of climate changes — posted at µWatts in January 2011. As I pointed out at the time, there are numerous errors in Easterbrook’s analysis of the GISP2 data — and one of them is made explicit in this two and half year old chart. If you want the full details, refer to my older post and its antecedents, but Easterbrook’s legend for the time series refers to “years before present (2000 AD)”. Unfortunately, the “present” in the time series he’s using is defined by long standing convention as 1950. This was pointed out to him at the time, both by me and in the comments under his article at µWatts. He can have no excuse, other than shoddy scholarship, for simply reusing the graph without correcting the error.

There are other interesting “parallels” between the µWatts article and the NIPCC report. Large chunks of the latter appear to be lightly edited versions of the µWatts “original”. Consider these two paragraphs:

µWatts 2011 original: The Medieval Warm Period (MWP) was a time of warm climate from about 900–1300 AD when global temperatures were apparently somewhat warmer than at present. Its effects were particularly evident in Europe where grain crops flourished, alpine tree lines rose, many new cities arose, and the population more than doubled. The Vikings took advantage of the climatic amelioration to colonize Greenland, and wine grapes were grown as far north as England where growing grapes is now not feasible and about 500 km north of present vineyards in France and Germany. Grapes are presently grown in Germany up to elevations of about 560 meters, but from about 1100 to 1300 A.D., vineyards extended up to 780 meters, implying temperatures warmer by about 1.0 to 1.4° C (Oliver, 1973, Tkachuck, 1983). Wheat and oats were grown around Trondheim, Norway, suggesting climates about one degree C warmer than present (Fagan, 2007).

NIPCC 2013: The Medieval Warm Period (900–1300 AD) that followed was marked by global temperatures warmer than at present, as indicated by the flourishing of grain crops, elevation of alpine tree lines, and building of many new towns and cities as the European population more than doubled. The Vikings took advantage of the climatic amelioration to colonize Greenland in 985 AD, when milder climates allowed favorable open-ocean conditions for navigation and fishing. Wine grapes were grown about 500 km north of present vineyards in France and Germany, and also in the north of England (Oliver, 1973; Tkachuck, 1983). Wheat and oats were grown around Trondheim, Norway, suggesting climates about one degree C warmer than the present (Fagan, 2009).

The words highlighted in green are identical between the two pieces of text, and the exact sequence most of the other elements of the original are maintained in the NIPCC report version.

Most amusingly, given that the NIPCC is committed to presenting the Medieval Climate Anomaly as both global and warmer than at present, is Easterbrook’s change to his first sentence: in 2011 “global temperatures were apparently somewhat warmer than at present”, but by 2013 he has become much more certain.

However hard you look, you won’t find a reference to the µWatts original in the NIPCC report, only to Easterbrook’s 2011 remarkable2 Elsevier book, Evidence-Based Climate Science: Data opposing CO2 emissions as the primary source of global warming (Amazon listing), where the error-ridden graph appears as Fig 24 on page 24. A little later in the book, on page 26, we find the above text from Easterbrook’s µWatts article repeated in full3.

Apart from being too lazy to correct an error from the beginning of 2011 for his book published nine months later, or this year’s NIPCC report4, Easterbrook appears to be a serial self-plagiarist with little or no concern for the accuracy of the stuff he publishes.

Life is too short to dig much further into the NIPCC’s misrepresentation of the state of our knowledge about the earth’s cryosphere and its response to warming, but its reliance on the “work” of Don Easterbrook is a telling indication that it is far from being the “scholarly report” its publishers claim. It is a parody of the IPCC, an inversion of the scientific process. It is the Heartland Institute’s Big Book Of Lies About Climate Change, and will be deservedly ignored by the reality it so badly traduces.

[Thanks to Jason Box and Mauri Pelto for taking time to look over the NIPCC chapter. It’s time they’ll never get back…]