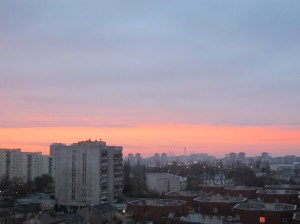 Will the sun rise over progress at the climate talks (is that a coal fired power station in the distance?)

Another year, another round of climate talks.  It’s the 19th Conference of Parties to the UN Climate Convention and we’re back in Poland, the scene of an almost complete non-event in 2008, the year before Copenhagen.

It’s Eastern Europe’s turn to host another meeting, and nobody else was prepared to put their hand up, so we’re back in the land of coal, in the country that has rallied their biggest coal companies to sponsor the conference, and which is dragging the whole of the EU down to their level as they refuse to accept stronger targets.  I suspect #coaland will be a well-used hashtag by the end of this.

Usually when you come to a meeting like this, the town is full of banners and signs that a climate meeting is being hosted, but there’s not much sign of it here in Warsaw, except this rather confusing industry advertisement at the airport.

Next weekend there’s a World Coal Association conference in town, being addressed by UNFCCC Executive Secretary Christian Figueres, who turned down a talk to youth at the Powershift conference in favour of talking with Big Coal.  She’s assured them it’s because she wants to “talk frankly” – let’s hope she does.

Last month the Polish hosts were caught posting a news piece heralding the melting of the Arctic as a new opportunity to explore for yet more fossil fuels.  While The YesMen (in a specacular own-goal, in my opinion) tried to claim the piece as their own, it was indeed the Polish Government’s own work. Given this government is chairing the talks, it’s not looking terribly hopeful.

Meanwhile in the Philippines, Cyclone Haiyan, the strongest tropical cyclone ever recorded, has caused a terrible loss of life that’s still being counted – and major damage.  With winds at 195mph as it made landfall, it beat the 1969 record,  according to Jeff Masters’ blog.  Sea surface temperatures were up to 1.5degC above normal.

What role will the science have in these talks?  Will the IPCC’s recent working group 1 conclusions make a difference?  Figueres has already confirmed the IPCC’s carbon budget figures will not be on the agenda.

Finance for the poorest

This meeting is supposed to be the “Finance meeting” where governments are expected to make progress on committing money to the Green Climate Fund. They’ve promised $100bn a year by 2020 to help the world’s poorest countries adapt to climate change and shift to renewable energy, but so far there’s little to show for it in the fund.

Governments agreed last year that this year would be when they set up the roadmap to get to a global agreement on climate to be agreed in Paris, 2015.  This should include a timetable for when they all put their increased targets on the table (early next year would be good) and that they will have a full draft negotiating text sorted out by next year, to be finalised by 2015.   But of course that 2015 agreement, even if it does get finished on time, wouldn’t come into force until 2020.  If the world does nothing except the Copenhagen pledges between now and 2020, it’s not going to be pretty. So there’s a strong call from many quarters for better 2020 targets to be put on the table as soon as possible.

How will New Zealand stack up?  During the course of the next two weeks, expect information to come out that will make it clear what New Zealand’s “fair share” of climate action actually is.  Given our walking away from Kyoto and the Ministry for the Environment’s recent admission that our emissions are set to soar, I don’t hold out much hope.

The Australians have made a spectacular start, announcing that for the first time in 16 years, no Minister will make it to the conference. Environment Minister Greg Hunt, recently famous for declaring there was no evidence of a link between climate change and bush fires (using the solid source of Wikipedia) is instead staying at home to dismantle the Australian climate legislation.  That’s a Fossil of the Day right there.

Then of course there’s the Russians.  What will they do?  Will they continue to throw their toys out of the cot about decisions being made in Doha without their agreement?  Will they actually start negotiating and be good global citizens?  (hint: releasing the 30 Greenpeace activists from the Murmansk prison would be a good start).

More to come, as it happens.   From both myself and from David Tong with the Adopt A Negotiator team.