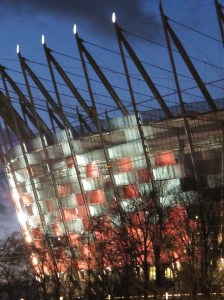 The first week here at the climate talks in Warsaw kicked off with the super typhoon Haiyan hitting the Philippines in a terrible tragedy, brought into the meeting by the country’s lead negotiator Seb Yano, whose fast has been joined by many from civil society. The plight of his people has been a rallying call around the world as we all look at the aftermath of this storm with horror.  Is it a direct result of climate change? What we do know is that the sea surface temps were 1.5degC above normal, and that we can expect more intense cyclones as the earth’s temperature warms.  But  as NCAR’s Kevin Trenberth wrote:

“The answer to the oft-asked question of whether an event is caused by climate change is that it is the wrong question. All weather events are affected by climate change because the environment in which they occur is warmer and moister than it used to be….”

As we’ve been all walking around in circles of the Polish National Stadium, trying to stay sane, looking at the images from the Philippines and the campaigning by their government to get a stronger outcome, it seems several governments have kept their eyes firmly OFF the ball, instead  taking the opportunity of the occasion to walk away from their commitments. Most notably, Japan.   After warning all year they’d do this, Japan announced their new target, sending it over a veritable climate cliff.  The change in target would increase the emissions gap outlined by UNEP just last week by 3-4%, according to calculations by the Climate Action Tracker (disclosure: I’m here in Warsaw working for Climate Analytics, who run this analysis with Ecofys and the Pik Potsdam Institute). Instead of reducing their emissions by 25% by 2020 on 1990 levels, Japan’s emissions will now increased by 3.1%. The general thinking is that Japan’s change in target is down to the fact that they’ve had to close all 54 of their nuclear power stations, so have had to switch to coal.  Not so.  The CAT calculated that if Japan’s nuclear industry didn’t re-open at all before 2020, they could still reach a target of 17-18%.

“The expected increase represents only 55% of the increase in emissions from the original Copenhagen pledge to the new 2020 target. The remaining 45% must therefore represent a change in Japan’s political will to reduce emissions.”

Not exactly an inspiration to other countries who have come here to negotiate a strong new 2015 climate agreement in good faith, and certainly not an inspiration to the people in the Philippines.  But perhaps this screenshot from Japan’s Ministry of Industry English website could explain it?

Next up, Australia.  As we all settled into the second day of the talks, Australia’s new government was busily dismantling its climate legislation, an exercise that will cost them more than $7billion. This may take a while, not least because the current Labour/Greens dominated Senate won’t change until after July. But the CAT has calculated that this move, if successful, and combined with Tony Abbott’s so-called “Direct Action” policy to replace it,  they are very unlikely to meet their (already totally inadequate) pledge of 5% reduction on 2000 levels by 2020. It’ll begin a recarbonisation of Australia’s electricity sector, just at the time when the new legislation was beginning to make a difference. Australia’s not even sending a Minister here for the High Level segment of the talks, for the first time in 16 years.  One gets the impression that this government really doesn’t give a flying (Castlemaine) XXXX about climate change, an extraordinary move given the rolling 12-month heat record set in August, September and October.  I think it’s clear who Tony’s listening to.  Certainly not Yeb Sano. Meanwhile the Polish Government is going ahead with hosting the World Coal Summit over the next two days.   More on that in my next post.