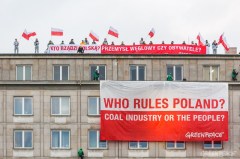 I’m not sure if the Polish Government really meant this to happen.

In the run-up to the climate talks, they had scurried round and found a bunch of largely fossil fuel and car sponsors to help them out.  Thanks to these sponsors, we’ve all been given coal-coloured bags with a big oil service company logo on it. Such a contrast from Durban where we had lovely cloth bags made from recycled fabric, made by people from villages across South Africa.

But in Warsaw today, he Polish Government and the coal industry must have been so pleased with their idea of setting up the World Coal Association “Coal Summit” at the same time as the climate talks. They even managed to persuade the UN Climate Convention’s Executive Secretary Christiana Figueres to speak at it, much to the fury of the youth, whose invitation she turned down.

But that’s when it all started to unravel.

First up was a press conference early this morning, organised by the European Climate Foundation where top scientists spelt out the  message that if we carry on using coal the way we’re going, we’ve got no hope of staying below 2degC of warming. Unabated coal use cannot continue and its financing and rise needed to be stopped now. They released a paper setting out their detailed scientific arguments for this, signed by a number of the world’s most qualified scientists on the subject. The “Cough for Coal” lungs in the streets of Warsaw. Photo” 350.org

Next, out on the Warsaw streets, was the “Cough4Coal” rally outside the coal conference.  They had a rather gruesome-looking, but pretty effective, set of lungs, highlighting the problems that coal presents for the people living around the mines and breathing in the air from the burning of it.

At the same time, Greenpeace activists climbed on top of the Polish Ministry of Economic Affairs and hung a big fat banner down the front of it with the message: “Who Rules Poland? The Coal Industry or the People?”

Things were really not going too well for the coal industry at this stage.  But still, they’d got the UNFCCC’s top honcho.    While some weren’t happy with bits of her messaging, she basically told the coal industry it had to leave most of the world’s coal reserves in the ground. I’d love to have seen their faces as she delivered her speech.

To top it all off, the activists then came into the Polish National Stadium, with a smaller protest (unfortunately the lungs were too big to deploy in the building), where they  proceeded to “kick coal out of the climate talks.”

So thanks to the Polish Government’s plan to highlight its favourite industry in the middle of the climate talks, pretty much the only thing the media focused on today was how bad coal is for the climate, how it wasn’t welcome in the talks, and how it needed to stay in the ground.

Activists had a field day. Everyone had been trying to find a way to really hook the coal message into this meeting, and they were handed it on a platter. 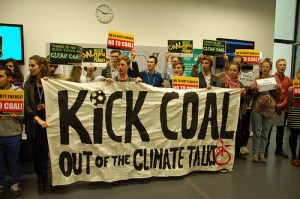 From scientists, to environmental groups, activists and the head of the UNFCCC, the coal industry got it in the neck from all sides.

Now’s the time to run one of the puns around the fact we’re in the stadium: the Polish Government kicked an absolute cracker of own [coal] goal on this one.