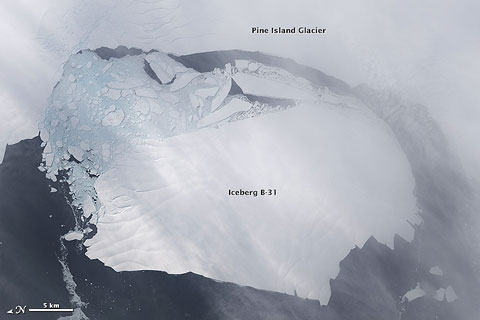 Warsaw has seen a deluge of important climate-related information released — so much that it’s been difficult to keep up — but still not enough to steel negotiators to reach an equitable arrangement that gives us all a chance at a reasonable future climate. And at the same time, the planet has been sending signals that it’s not happy. The Pine Island glacier has finally calved the giant iceberg that first started to shown signs of cracking away from the ice stream a couple of years ago. Iceberg B-31 has been described as being the size of Singapore (about 700 km2), but isn’t likely to move far from Pine Island Bay in the near future. NASA Earth Observatory coverage here and here; see also Telegraph (UK) and Antarctic Sun.

The Global Carbon Project announced earlier this week that greenhouse gas emissions are projected to reach the highest level in human history this year — 36 billion tonnes. There are some encouraging signs that the rate of growth may be slowing, but nowhere near enough to enable the planet to avoid hitting a two degree rise in the first half of this century. There’s an excellent visualisation of national emissions at the Global Carbon Atlas (and at the Guardian). See also The Age, Think Progress.

All that carbon has to go somewhere, and the global oceans are doing us a big favour by absorbing a lot of it. Unfortunately, there’s a big downside: the oceans are becoming more acidic, and at a rate faster than at any time in the last 55 million years. The prospects for marine ecosystems look bleak if we can’t kick the fossil fuel habit, according to a Summary For Policymakers [pdf] released by the Intergovernmental Oceangraphic Commission last week.

Regular Hot Topic readers will know that I’ve never been much persuaded by talk of a “pause” in global warming’s progress. If global warming stopped in the 1990s, why has the last ten years been the warmest in the long term record, and why has the ice kept on melting? To put the final nail in the pause’s coffin, Kevin Cowtan from the University of York and Robert Way from the University of Ottawa (both stalwarts at Skeptical Science), looked at global temperature records and found ways of compensating for the temperature data missing from the Arctic and Africa. Here’s Cowtan, explaining what they did.

Net result: existing temperature data series underestimate recent warming by half. If that’s all straightforward enough, take a moment to consider what will happen to warming when the factors that have been acting to restrict warming swing to the opposite phase. We’ll be heading into the unknown, and at high speed. See Real Climate, Dana Nucitelli at the Guardian, and Science Daily.

And finally: this is the time of year when the World Meteorological Association releases its preliminary look at the weather and climate events of the current year. It’s not a pretty sight. 2013 is tracking along to be the 7th warmest year in the long term record. WMO Secretary-General Michel Jarraud noted: “the coldest years now are warmer than the hottest years before 1998.” Another reason to kiss the pause meme goodbye. See Climate Central, Guardian.