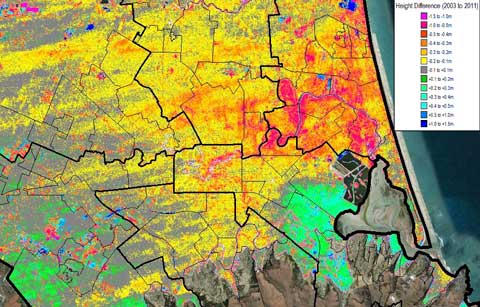 The first major study to look at the impact of sea level rise on Christchurch and Banks Peninsula following the 2010/11 earthquake sequence projects a watery future for many parts of the city and its surrounding shorelines. The image above1 shows changes in ground elevation between 2003 and 2011 in the Christchurch region. Areas in green/blue have moved upwards by half a metre – particularly noticeable to the west of the estuary – and areas in red and yellow down, in many places along the Avon and subsidiary streams by a metre or more.

The report, Effects of Sea Level Rise on Christchurch City (pdf), by consultants Tonkin & Taylor was released last week and suggests that as a minimum planners should take into account a 1m rise in sea level over the next 100 years. Combined with the elevations changes caused by the earthquakes, this would mean significant shoreline retreats, increased flooding in many areas and the loss of hundreds of hectares of land to the sea. It’s well worth digging into the report to get the full picture, and it will make uncomfortable reading for many in the city.

Tonkin & Taylor prepared their study before the IPCC’s AR5 Working Group One report was released, and so based their SLR numbers on a literature search and the Royal Society of NZ’s 2010 paper. They suggest a “plausible upper range” of 2m over the next 100 years, with the behaviour of the West Antarctic and Greenland ice sheets in a warming world “probably the largest uncertainty in sea level rise projections”.

And now the bad news…

The Pine Island Glacier (PIG) in West Antarctica — responsible for 25% of the ice loss from the region — is now probably beyond the point of no return, committed to melt back well inland from its current position even if the local climate cools strongly. In a new study published in Nature Climate Change this week2 an international team of scientists used detailed models of the glacier and its bed, combined with field observations, to track how the ice would behave. It suggests that the PIG could contribute as much as 10mm to sea level over the next 20 years, with the potential for much more in the longer term, as one of the authors, Dr Hilmar Gudmundsson of the British Antarctic Survey points out:

“Pine Island Glacier shows the biggest changes in this area at the moment, but if it is unstable it may have implications for the entire West Antarctic Ice Sheet. Currently we see around three millimeters of sea level rise a year, and the Pine Island Glacier retreat could contribute an additional 3.5 – 10 millimeters in the next twenty years, so it would lead to a considerable increase from this area alone. But the potential is much larger. At the Pine Island Glacier we have seen that not only is more ice flowing from the glacier into the ocean, but it’s also flowing faster across the grounding line — the boundary between the grounded ice and the floating ice. We also can see this boundary is migrating further inland.”

If the PIG is already doomed to major retreat over the next century, then stability of the whole West Antarctic Ice Sheet could be threatened. Paleoclimate studies have shown that the WAIS collapsed repeatedly in earlier warm periods, though it is thought to have taken 500 – 1,000 years to melt. During the last interglacial 125,000 years ago, sea level peaked at about 6m above present with significant melt contributions likely from the WAIS and Greenland. That was with CO2 at 300ppm. We’re now nudging 400ppm.

Ice sheet behaviour in a rapidly warming world is not something we understand well, and that means that any sensible analysis of the risks of sea level rise has to consider worst cases in both the near and long term. We can get a good idea of the long term sea level rise — where the sea level will stop rising when the climate comes into equilibrium with the ice sheets — by looking at climate history. 400ppm CO2 probably means an eventual 20m of sea level rise.

In the short term — over the next few decades — unless something truly astounding happens to the WAIS or Greenland, the impacts of sea level rise are likely to be modest and manageable — at least if affected communities take the problem seriously. But when planning infrastructure that has a longer lifespan — like rebuilding a city — then the multi-metre rises we are likely to see over the next hundred years become a critical consideration. As yet there’s little sign — Tonkin & Taylor’s thorough report included — that anyone is thinking in those terms.