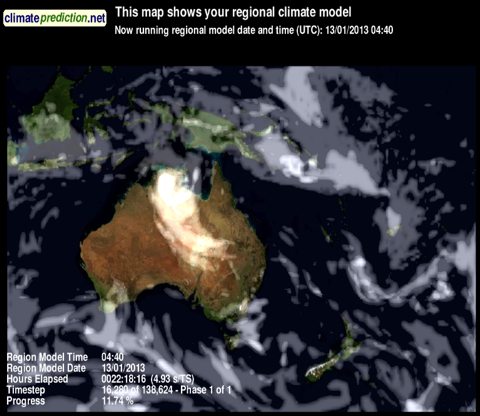 That’s a climate model running on my iMac, thanks to BOINC, Climateprediction.net, and the new New Zealand and Australia modelling experiment launched yesterday. In this guest post, Dr Suzanne Rosier of NIWA explains what it’s all about…

A new citizen science experiment in which scientists will address possible links between climate change and extreme weather in Australia and New Zealand was launched on Wednesday. Weather@home ANZ runs as part of the highly successful climateprediction.net project based at the University of Oxford, which makes state-of-the-art climate models available for anyone with a PC and an Internet connection to download and run on their computer. The global model contains within it a much more detailed model of the Australia/New Zealand region, detailed enough to model weather events properly, and the ‘2-in-1’ model needs to be run many thousands of times if scientists are to have a chance of capturing the very rarest weather events. This takes a huge amount of computing power – and you can help by volunteering your computer.

The model runs in the background on your machine, taking up any processing power that happens to be spare, but not interfering with your work. When your computer has finished crunching the results are automatically uploaded to a server at the University of Tasmania. If you take part in the project you also have the option to see how the model you are running on your machine is progressing. Many thousands of generous volunteers have already taken part in climateprediction.net, running global models, and Weather@home, running regional models for other parts of the world. This is your chance to get involved and help scientists to gain a better understanding of what is happening to weather in Australia and New Zealand region as the climate changes.

The experiment launched today will produce many thousands of different simulations of how the weather in 2013 might have been, both with and without anthropogenic greenhouse gas emissions. This will enable scientists to put some hard numbers on how the risks of extreme weather events might — or might not — be changing as a result of the human contribution to global climate change. Scientists at NIWA will focus initially on the severe North Island drought of January to March 2013, but later the record-breaking warmth of last year’s winter will also come under scrutiny. Extreme rainfall events, such as that in Golden Bay and Nelson in December 2011 and the recent floods in Christchurch, will also be investigated as the Weather@home ANZ experiment continues.
The more people who participate, the more science can be done. Please go to ‘weatherathome.net’ – sign up, and start crunching numbers.

Gareth adds: Suzanne does an excellent job of introducing the project in this video:

Read more about the project at Climateprediction.net, The Conversation, and NIWA. If anyone’s interested in running an NZ climate team, let me know. For some background to the difficult statistics of extreme weather events, I highly recommend this recent article by Stefan Rahmstorf at RealClimate. The Weather@home ANZ models will run (via BOINC, the framework for distributed processing developed at Berkeley and used in a wide variety of distributed computing projects such as Seti@home or Folding@home) on most recent releases of Windows, Mac OSX and Linux.