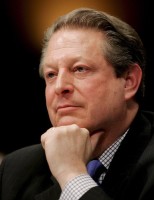 Al Gore has written an impressive long article in Rolling Stone magazine. I read it with gratitude and wanted to recommend it to others. It’s a highly readable text packed with rich detail which reflects the wide spectrum across which Gore operates and the considerable intelligence which informs his thinking. It deserves wide readership.

The article proclaims new grounds for hope that we will yet find our way to a low-carbon global economy in time to prevent the worst effects of unchecked climate change. Gore opens with an affirmation that a powerful yet largely unnoticed shift is under way in the needed transition. Here is the surprising fact that signals hope:

“Our ability to convert sunshine into usable energy has become much cheaper far more rapidly than anyone had predicted.”

The cost of solar electricity has decreased by an average 20 percent per year since 2010. Gore sees an ongoing decline in cost to the point where by 2020 more than 80 percent of 0the world’s people will live in regions where solar will be competitive with electricity from other sources.  This is already the case in at least 79 of the world’s countries.

With lowering costs Gore considers we are witnessing the beginning of a massive shift from the “central station” utility-grid model to a “widely distributed” model with rooftop solar cells, on-site and grid battery storage, and microgrids.

He cites evidence from many places that the shift to solar energy is under way and successfully so. Not least is the alarm shown by many utilities whose electricity is produced by fossil fuels. Gore points to the recent decision of Barclays to downgrade the entirety of the US electric sector because the declining cost trends in distributed solar ­photovoltaic-power generation and residential­-scale power storage is likely to make utility investments less attractive.

Fossil fuel interests are fighting back against solar energy, often fiercely. Gore points for example to Koch brothers-funded efforts to persuade state legislatures to tax home-owners who install photovoltaic panels on their roofs, claiming they are involved in “greedy” free-riding. But the vested interests are losing the battle as solar and wind costs come down and fossil fuel costs go up.

The article ranges widely from its early focus on solar energy and includes compelling surveys of the effects of climate change already being experienced in increased extreme weather events, droughts, floods and sea level rise, along with warnings from current science of worse to come. Gore’s writing on the impacts of climate change is always firmly tethered to the science but less constrained by the degree of scientific reticence considered necessary for professional scientists.

As a lay person myself deeply alarmed by what I see to be the implications of the advancing science I welcome Gore’s readiness to write clearly and unequivocally of the impacts of climate change and not to soften his perceptions. Too many policy makers take refuge in best case scenarios, though there is no assurance that they will eventuate.

But the main purpose of Gore’s article is to emphasise that there is reason for hope that we can yet avoid the worst outcomes. In addition to technology he discerns and tracks many new trends in business, in economics and in politics which he presents as grounds for such hope. And in the course of these discussions he sounds the refrain:

“And all the while, the surprising and relentless ongoing decline in the cost of renewable energy and efficiency improvements are driving the transition to a low-carbon economy.”

Gore is not afraid of oratorical undergirding as he develops his theme. Churchill warning of fascism in the mid-1930s and Martin Luther King in some of the bleakest hours of the civil rights revolution are both invoked.

Of particular aptness is his reference to the words of the American poet Wallace Stevens:

“After the final ‘no’ there comes a ‘yes’
And on that ‘yes’ the future world depends.”

Gore reflects on the noes that nevertheless gave way to the abolition of slavery, women’s suffrage, the reining in of the nuclear arms race, the quickening global recognition of gay and lesbian equality, and indeed every forward advance in the long march of social progress.

Not that Gore expresses abounding optimism. He is well aware of the obstacles ahead and the power of well-funded opposition. But he nevertheless allows himself to hope and urges his readers to have the courage to reject despair and be part of the active citizenry which is essential to achieving change.