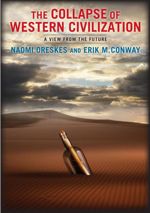 Science historians Naomi Oreskes and Erik Conway, co-authors of the acclaimed Merchants of Doubt, have joined forces again to produce a striking short fictional work The Collapse Of Western Civilization: A view From The Future. It purports to be an essay written by a Chinese historian three hundred years after the collapse of western civilisation towards the end of the 21st century when untrammelled climate change took its full effect.

The period of the Penumbra (1988-2093) ended in the Great Collapse and Mass Migration (2073-2093). That’s the scope of our Chinese historian’s survey. He (or she)records the dawning scientific realisation of the effects human activities were having on the planetary climate, the setting up of the Intergovernmental Panel on Climate Change and the first manifestations of the change in the intensification of fires, floods, hurricanes, and heat waves. Thus far he writes of matters familiar to us.

He then moves on to recount the rapidly mounting disasters as the century proceeds. It’s somewhat unnerving to read of what we know as predictions as if they had already become the stuff of history. All the more unsettling because anyone who follows climate science will recognise that the chain of disaster he traces, from failing food crops in intense heat waves to unmanageable sea level rise as the West Antarctic and Greenland ice sheets begin to disintegrate is entirely possible if greenhouse gases continue to be pumped into the atmosphere by human activity. The resultant human suffering and death the historian records may be more speculative from our end, but his calm account of the human consequences has a dismaying ring of likelihood to it.

The startling aspect of this rapid decline to the historian is that the people caught up in it knew why it was happening but were unable to act upon what they knew. “Knowledge did not translate into power.” In fact, in full contradiction to what was known, a “fossil fuel frenzy” developed just when the urgency of a transition to renewable energy was becoming undeniable. The frenzy was exacerbated by the expansion of shale gas drilling and as gas became cheaper it supplanted nascent renewable energy industries.  Oil from tar sands also became an attractive commercial prospect and developed apace.

There were notable exceptions. China, for instance, took steps to control its population and convert its economy to non-carbon-based energy sources. The West didn’t like population control and didn’t notice that the rapid rise in greenhouse gas emissions in China masked the renewable energy revolution taking place at the same time. China’s emissions fell rapidly by 2050. “Had other nations followed China’s lead, the history recounted here might have been very different,” comments our Chinese historian, perhaps a trifle smugly.

A shadow of ignorance and denial had fallen over people who considered themselves children of the Enlightenment. “It is for this reason that we now know this era as the Period of the Penumbra.”  A second Dark Age, in other words.

How did it happen? Perhaps surprisingly the scientists themselves get some of the blame. They failed to recognise how much was required of them in communicating the broad pattern of climate change. They concentrated on their specialist areas. They were too concerned to demonstrate their disciplinary severity by setting unnecessarily high standards for proof that various phenomena were linked to warmer temperatures. They were culturally naïve in the face of the powerful societal institutions determined to continue to use fossil fuels.

However it was the dominating ideology of market fundamentalism which prevented the West from coming to grips with the threat of climate change, although the technological knowledge and capability to do so was available to them. Even when some scientists realised that they needed to be more urgent in communicating the full implications of their knowledge to the public they could make no headway against the neoliberal economic theory which prevailed. The ideology suited those who wanted to continue with fossil fuels and who were quite prepared to jettison the science which pronounced the folly of doing so. And so the protagonists of neoliberal economics blocked a managed transition to a low-carbon economy. They were left in the end with only disaster management, and ironically with the centralised government and lack of personal choice which they most dreaded.

Is this, or something like it, really going to be our future? The authors are not being fanciful in the scope and grimness of their future historian’s record and analysis. There is no reason to suppose our civilisation can avoid the massive translocations and severe human suffering that will ensue if greenhouse gas emissions continue on their present trajectory. And there is little enough evidence of a political will to avoid that path and manage a rapid transition to non-carbon energy systems. Indeed denial is still on the rampage in many circles of government and industry. Think of Tony Abbott or Stephen Harper and their cohorts, or of the madness that is abroad in the utterances of some US Republican politicians.

The tepid and ambiguous climate concern which characterises governments such as our own in New Zealand is no more reassuring. Being hell-bent on further fossil fuel discovery and exploitation is hardly compatible with action to rein in climate change. The “fossil fuel frenzy” of the book is in full operation here.

Oreskes and Conway do justice to the full seriousness of climate change. That seems to me prime among the many values of their book. The consequences of unrestrained climate change will surely be shattering. Their sheer magnitude is hard to appreciate and few seem to grasp it. The historian the authors have imagined writes in the unimpassioned and analytical language proper to his profession. We can’t and shouldn’t match him in that regard. The future reality the book portrays is fearful. It must be our spur to insistently demand that our governments throw off the shackles of ideology and take the pragmatic steps which can yet avoid the worst that climate change will bring. For all its dispassion the book is a call to arms.