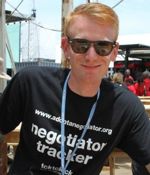 This guest post is by David Tong, an Auckland based community lawyer working on his Master’s in Law on the UN climate talks. He chairs the P3 Foundation and co-chairs the Aotearoa New Zealand Human Rights Lawyers Association, and last year tracked New Zealand’s climate negotiators as an Adopt a Negotiator Fellow.

Nicky Hager’s Dirty Politics and the subsequent revelations have shaken New Zealand’s Government. On Saturday, Minister of Justice Judith Collins resigned, facing allegations of interfering with Serious Fraud Office investigations. On Sunday, the Inspector General of Security and Intelligence summonsed the Prime Minister — or perhaps just his Office — to appear before a hearing into the Dirty Politics allegations on 11 September 2014, just nine days before the election.

But three key ministers have escaped remarkably unscathed from the scandal: Ministers Tim Groser, Nick Smith, and Amy Adams. Tim Groser, our Minister for Climate Change Issues, has danced past the scandal without a speck of dirt. Minister for Conservation and Housing Nick Smith, who resigned as Minister for the Environment after admitting two relatively minor indiscretions must be spitting mad at how many final warnings Judith Collins flouted before resigning. Of the three, only Amy Adams faced a substantive allegation in Hager’s book, which alleges that she printed, scanned and forwarded an invitation accidentally sent to her by the Labour Party to Judith Collins, who then leaked it to the far right blogger at the heart of the scandal.

But compared to the other allegations in Dirty Politics — or even the past conflict of interest allegations levelled at Adams — these matters are minor. Hager’s book only mentions climate change once. Other emails show at most that Slater ran an ineffectual smear campaign against Generation Zero, which may or may not have been encouraged by Government figures. All this could be interpreted to mean our Government plays cleaner on climate change than it does at home.

That suggestion is wrong. Our domestic and international politics mirror each other. Dirty politics at home are mirrored by dirty tricks at the climate talks. The last few rounds of negotiations brim with examples.

My first exposure to the United Nations Framework Convention on Climate Change negotiations came when I attended the 2011 Durban Talks with the New Zealand Youth Delegation. Three days into the talks, small island negotiators torpedoed my naiveté when I was lucky enough to get into a closed door Alliance of Small Island States briefing. Hearing representatives from some of the most vulnerable states describe New Zealand as “pulling the Kyoto Protocol down to the lowest level of ambition, and the lowest level of cooperation” by taking “deliberately inconsistent” stances sank my idealism about my country without a trace.

Like Hot Topic‘s Durban correspondent Cindy Baxter, I had no idea what we were playing at, but knew we were “cheating and lying”. In particular, we stood accused of proposing a “wild west” carbon market allowing secret, bilateral sales of carbon credits, with no central register to prevent us from selling the same units twice. By the end of the Conference, our veneer of conditional support for a Kyoto Protocol had collapsed, with Minister Groser describing a Second Commitment Period as “actually an insult to New Zealand”.

In the eyes of the NGO community, though, we had improved a tiny bit, narrowly escaping a Colossal Fossil award for disrupting negotiations the most by sneaking into third place, after coming second overall in 2010.

We made up for lost time in 2012, by walking away from the Second Commitment Period of the Kyoto Protocol. In doing so, we further abandoned our past claims of conditional support for a Second Commitment Period and, ultimately, further betrayed the trust of our Pacific neignbours: “Its island partners in the Pacific should think again before ever trusting NZ again.” After our near misses in 2010 and 2011, we cleanly took out the 2012 Colossal Fossil award. The Climate Action Network sledged our “exceptional blindness to scientific and political realities” and accused us of trying to “drown the talks” — and our Pacific neighbours. What credibility we had in the talks, we tossed away with the Protocol. For our dirty deeds, the Doha talks agreed to shut NZ out of international carbon markets from next year.

I went back to the climate talks last year as an Adopt a Negotiator Fellow, tracking New Zealand in the talks. After the beating we took in 2013, we kept our heads down. But, again, I saw a duplicity between domestic politics and international posturing. While ministers laughed at Russel Norman quoting Philippine lead negotiator Yeb Sano and denied the very existence of climate change at home, our negotiators advanced a platform of “Bounded Flexibility” — a nice name for almost pure voluntarism. Jim Salinger described this sort of approach as inviting people to volunteer to pay taxes. And when I was lucky enough to spend a day with Marshall Islands Minister Tony de Brum, I couldn’t help but compare our hollow lack of ambition in Warsaw with our decision to sign the Majuro Declaration on Climate Leadership. At the Pacific Islands Forum — and no doubt this week at the Small Island Developing States Conference — we pledged to stand with our Pacific neighbours, but in the UNFCCC, we don’t — and they know that.

We play dirty on climate change. If our international record wasn’t enough to show this, you just have to look at our domestic emissions trading scheme. Far from cutting emissions, it has subsidised pollution.

The only question is whether a change in Government will change this. Under Helen Clark’s Labour Government, we still copped at lot of flak at the climate talks. Last year, in Warsaw, our lead negotiator said that she did not believe a change in government would change our international stance. Paradoxically, however, we have excused inaction around this month’s Ban Ki Moon Summit because of the uncertainty around our election. Labour and the Green Party have both committed to meaningful domestic action, but this needs to be coupled with cleaning up our international act.

On Wednesday night, the Climate Voter Coalition are hosting a debate, and all the major parties have fronted up. Tickets are sold out, but you can stream it live here. I will be watching it with interest, because our climate politics need cleaning up. It’s time to wash out the dirt.