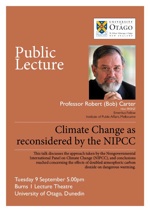 For reasons best known to themselves, Otago University’s senior management this week provided climate denier and serial plagiarist Bob Carter with no fewer than two opportunities to spread his misinformation and misrepresentation of the state of climate science. The first, a public lecture on Tuesday evening (poster on left), gave Carter the chance to spruik his Heartland-funded and partially plagiarised “NIPCC” report. The second — given to the geology department of which he was a member from 1964 to 80 — was titled Has environmentalism become anti-scientific? Four Australian case studies. Given that Carter now represents himself as an “emeritus fellow” of the Institute of Public Affairs, Australia’s home-grown version of the far-right US lobby group the Heartland Institute, his conclusions in either presentation are not difficult to guess.

At Tuesday’s public lecture he was not given an easy ride, as an on-the-spot reporter confirmed to Hot Topic. Carter was welcomed by the local branch of the Flat Earth Society. Every five or ten minutes there were cries of “We love you Bob Carter” (in a West Indian accent, my source confides) from outside the lecture theatre.

There was the usual slide comparing the ensemble of GCM models with “actual data”, the latter from Spencer (radiosonde and satellite). At question time, a student asked if this data was truly global or just for the tropics, and Carter lied by insisting it was global.

Being a geologist, Carter loves the “it’s happened before, so it can’t be us” misdirection, and offered one new to our correspondent:

He showed CO2 levels over the last 500 Myr, which makes clear the uptake of CO2 from about 10-15 times current levels from the formation of coal deposits during the Cretaceous. He then argued that all we are doing is digging it up and putting the carbon back where it came from. What can be the harm in that? Probably not much if you are dumb enough to think that humans could survive in a Carboniferous climate.

Question time was a little bumpier for Carter.

Alan Mark in particular was quite scathing of Carter’s views. One questioner gave a thorough description of his involvement as a lead reviewer for IPCC and challenged Carter’s allegation that the IPCC was political. Carter did not explain the difference between the WG reports themselves and the Summary for Policy Makers (for which the bureaucrats do have input). By contrast, NIPCC was completely independent and not conflicted in any way, he alleged. That drew a few sneers from the audience, and a question about where the NIPCC funding came from. Some family trusts, he said. Which family trusts? Not going to tell you, he said.

For the record, let us note that Carter is paid by Heartland for his role in the NIPCC, which is a “panel” put together by Fred Singer and the Heartland Institute purely as a propaganda publication. Any relationship between the NIPCC and real science is entirely accidental, and Carter is up to his neck in the fossil-fuel funded extreme right wing campaign to delay action on climate change.

Quite why Otago University chose to give Carter a platform remains a mystery. The University obviously has an extremely broad definition of what constitutes an academic contribution to public debate. No doubt we can look forward to further university-sponsored lectures from anti-flouride activists and chemtrails enthusiasts — both delusions with as much credibility as Carter’s Nongovernmental International Panel on Climate Change.

Carter — a proven plagiarist who never saw an argument against action on climate change that he wasn’t willing to promote if paid enough — has lived up to expectations. Otago University has failed to meet them.