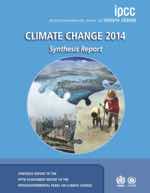 The IPCC’s Fifth Report process reached its climax in Copenhagen yesterday with the release of the final “synthesis” report (download here), which pulls together all the strands from the three working group reports on the physical science (Working Group 1), climate impacts (WG2) and how to go about dealing with the problem (WG3). Launching the report, UN secretary general Ban Ki-moon was blunt:

“Science has spoken. There is no ambiguity in their message. Leaders must act. Time is not on our side.”

Given that it’s based entirely on the work done for the underlying reports, there are no surprises the synthesis report for anyone who has been following climate news over the last year, but what is striking is the emphasis on the need for rapid and deep cuts in fossil fuel emissions – and a corresponding steep increase in investment in renewable energy sources. Ban Ki-Moon emphasised the point in a comment aimed at investors:

“Please reduce your investments in the coal- and fossil fuel-based economy and [move] to renewable energy.”

Writing in the Guardian, Bill McKibben notes an increase in the urgency of the language being used:

This week, with the release of their new synthesis report, [scientists] are trying the words “severe, widespread, and irreversible” to describe the effects of climate change – which for scientists, conservative by nature, falls just short of announcing that climate change will produce a zombie apocalypse plus random beheadings plus Ebola. It’s hard to imagine how they will up the language in time for the next big global confab in Paris.

The Guardian’s coverage is – as always – exemplary. In addition to Damian Carrington’s news report, they also give good graph. See also the BBC, and Stuff – who take the AP coverage.

It is the best scientific assessment of climate issues available. I’m delighted that New Zealand scientists have contributed to this body of knowledge.

If that’s really the case, why is Groser enacting policies which are currently pointing NZ towards a 50% increase in emissions instead of deep cuts? Perhaps he should be listening to Ban Ki-moon when he says “”There is a myth that climate action will cost heavily, but inaction will cost much more.”