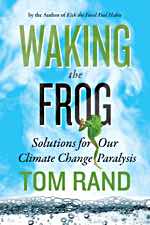 Canadian Tom Rand is an enthusiastic promoter of the clean technologies which are fully capable of saving us from the worst ravages of climate change. He’s also an investor in the field – a capitalist, he happily acknowledges. And importantly for his readers he’s a lively and thoughtful writer with a knack for striking observation. Waking the Frog: Solutions for our Climate Change Paralysis [Amazon] is partly an attempt to understand why we have stepped back from what looked in the early 1990s like a promising start to rein in greenhouse gas emissions. It is also an affirmation that we have the means to move rapidly away from fossil fuels if we have the will.

Rand hopes that the fact that he is a capitalist operating within the system he critiques will lend credibility to his criticisms.

He is adamant that it will be the power of the market that rescues us (if anything does). But it’s a significantly different market from that which obtains at present. Indeed the current free market can do nothing for us. The logic to which markets work will leave us wedded to fossil fuels. Intervention in the shape of an imposed price on carbon, whether by a carbon tax or a cap-and-trade system or a combination of the two, is required. That will redirect the power of the market to advance the clean energy solutions which are waiting in the wings. Even the current energy giants will become as much a part of the solution as they are presently part of the problem. A little hard to credit, this last, but Rand is confident that it will be the case under a firm carbon price regime.

Since the early 1990s the world has descended into a theatre of the absurd says Rand. We have listened to the siren song of denial and persuaded ourselves that there is no need for the clear measures that were first proposed. He makes some perceptive comments on the peer group effect in supporting our disinclination to act decisively. He notes that Canadian Prime Minister Stephen Harper is notorious for hearing the views of only a few like-minded people, as was George W. Bush.

“The peer group effect explains why ideologues become so immune to what seems, to an outsider, obvious empirical counterevidence.”

It’s a significant observation with application to New Zealand as well. Our government seems impervious to the obvious fact that further fossil fuel discoveries spell not economic hope but high risk of disaster. One can only presume they confine their conversation to circles where the notion that oil and gas discoveries mean desirable wealth is never disturbed by climate change queries.

Rand is scornful of economists who fail to acknowledge the magnitude of future climate disruption. “There are no actuarial tables for a warming world.” Scientists best understand the risks of future disruption and economists should be guided by them as they weigh the costs of current action to reduce emissions against the future costs of failure to take action now. Nicholas Stern is singled out as best in this regard. Bjorn Lomborg, with whom Rand has debated, is decried:

“….he continues to provide comfort to those who would have us save our pennies rather than invest our dollars to lower the intensity of the climate storm.”

Rand stresses that global industrial infrastructure and financial markets are well up to the task of running civilisation on clean renewable energy. Efficient use of energy will cut the size of the task. Historically unprecedented market intervention in the form of a carbon price will hurry the process along. Closing down plants before the end of their operating life and leaving proven reserves of fuel in the ground will be necessary, however much it distresses the owners of those assets. Dedicating a significant portion of our infrastructure to the task will be required. And all this will rest on broad public support.

It’s that support which is not yet in evidence, and Rand struggles as much as any of us to account for its absence. I was interested that he refers to economist J. K. Galbraith’s 1992 book The Culture of Contentment. It was a book which had been on my mind during our recent election as I reflected that nothing relating to longer term issues such as climate change was going to get a serious airing in public debate.

Not that reference to Galbraith’s considered observations is all that much help in changing things, however much light it may shed on the obstacles. Rand quotes him:

“…the fortunate and favoured, it is more than evident, do not contemplate and respond to their own longer-run well-being. Rather, they respond, and powerfully, to immediate comfort and contentment.”

How does this mindset get changed? How does the frog become alerted to the slowly warming water before it is overwhelmed? For all Rand’s confidence in the adequacy of technological solutions, his awareness of the severe danger of climate disruption, his analyses of human psychology, he remains dependent on an appeal to human intelligence.

“It is an insult to our collective and historical intelligence to continue to ignore the warming climate and all its repercussions.”

It’s an appeal humanity may not respond to. Nevertheless it is important that books like Rand’s continue to be written, all the more when the authors are as intellectually alert and aware as he. The field must not be left to the forces which will lead to climate chaos.