Last year was the warmest year on record for the planet, analyses by NASA and NOAA show, and it’s possible that 2015 could be warmer still. 2014 was warmer than previous record holders 2005 and 2010, and comfortably ahead of 1998. 13 of the hottest 15 years on record have all occurred since 2000. Remarkably, 2014’s warmth was achieved without much assistance from an El Niño — which boosts global temperatures and is normally a factor in record setting years, as this graphic from Skeptical Science shows: 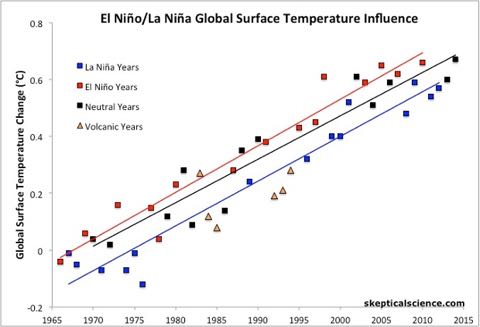 For more discussion of ENSO’s impact on temperatures, see Dana Nucitelli’s article at The Guardian, and Jim Hansen et al’s discussion here. Hansen warns that more warming could be on its way:

More warming is expected in coming years and decades as a result of Earth’s large energy imbalance, more energy coming in than going out, and with the help of even a mild El Niño 2015 may be significantly warmer than 2014.

The risk of further rapid rises in global temperatures could also be increased by early signs that the Pacific Decadal Oscillation (PDO) may be shifting to its positive phase, as the Peter Hannam at the SMH pointed out late last year:

“During a positive PDO phase, you’d expect temperatures to keep climbing again as they did in the 1980s and 1990s,” Dr (Shayne) McGregor (of UNSW) said, adding that as PDOs are measured by rolling 11-year averages, it will be a while before any shift becomes clear.

In New Zealand, NIWA reports that the nationwide average temperature for 2014 was 12.8°C, 0.2°C above the 1981–2010 annual average, but that June was tied for warmest in the long term record. The MetService blog provides a good overview of regional weather here.

For further analysis and discussion, there is a lot of good coverage and supporting information available on the web. Here’s my pick of some of the best.

News coverage: New York Times (above the fold on the front page, no less), BBC, Guardian, Stuff (taking the AP coverage). Time makes the obvious point: warming continues unabated, which should give the lie to climate crank nonsense about no recent warming1.

Background analysis: the Climate Council in Australia (who created the graphic at the top of this post), a superb Bloomberg graphic, Climate Nexus, Climate Central (one and two), and for my favourite visual reminder of how warming has progressed, here’s NASA’s animation of global warming from 1880 to 2014: