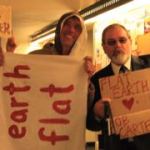 Sciblogs editor Peter Griffin recently gave climate denial activists Bryan Leyland and Bob Carter a “right of reply” to my post pointing out the errors and inconsistencies in a Dominion Post op-ed penned by the pair. Griffin took this action because of vociferous complaints from Leyland, who took offence at my discussion of his expertise (non-existent) and history of campaigning against action on climate. The result is billed as a “rebuttal”, but it isn’t, as I shall demonstrate.

The Sciblogs “rebuttal” is a mishmash of a so-called “fully referenced” version (pdf) of the op-ed that Leyland says was supplied to the Dominion Post, but he and Carter also prepared a very long-winded “response” (pdf) to the debunking of their piece by David Wratt, Andy Reisinger and Jim Renwick in the DP. The latter is a real eye-opener…

Life is too short to do another point-by-point demolition1, so I’ll select a few key issues that demonstrate that although they claim to be discussing science in a scientific manner, what they are actually doing is having the equivalent of an argument in a pub — prepared to say anything if they think it will help them “win”.

It’s instructive to look at the references Leyland and Carter supplied to support their original op-ed, and use in their Sciblogs article. They include a blog post by Roy Spencer and others at µWatts and The Hockey Schtick, graphs that either don’t prove what they claim, or are scaled to make it difficult to see what’s happening, reports at right-wing web sites (Breitbart, International Business Times), and Congressional evidence given by climate denial activists. Precious little real science on display, in other words.

Worse, where they do cite real science they get the reference wrong. To support their claim that climate models have failed to project the slowdown in surface temperature trends, their Sciblogs piece cites “IPCC AR5 Chapter 9, Box 9.3.2″ supporting this sentence:

The IPCC’s 5AR states that 111 out of 114 their climate model runs failed to reproduce the actual temperature record.

A carefully nuanced statement in a long discussion of what the IPCC refers to as “the hiatus” — and certainly not a statement about “failing to reproduce the temperature record”. Worse, if you bother to read the whole thing, you find that Leyland and Carter have been cherry-picking stuff that suits their argument, while ignoring the points that don’t. Also from Box 9.2:

There is hence very high confidence that the CMIP5 models show long-term GMST trends consistent with observations, despite the disagreement over the most recent 15-year period.

Enough of that. Time to dig a little deeper. Leyland and Carter’s “Discussion of remarks made by Wratt, Reisinger & Renwick (WRR) in the Dominion-Post on global warming” (pdf) is worth perusing, because it is a perfect illustration of their approach to the evidence. Recall for a moment that a central claim of their DP op-ed was that “the world has not experienced any significant warming over the last 18 years”. Now read this paragraph from their “discussion”:

Though the statement [that the earth is warmer than 100 years ago] is true, 100 years is too short a period of time to assess true climatic change, consisting as it does of just three climate data points.

Leyland and Carter insist that 18 years is enough to know that warming has stopped, but 100 years isn’t long enough to prove there has been real warming. The sheer intellectual hypocrisy evident here is breathtaking — and very revealing.

This isn’t a scientific debate. This isn’t how people with real expertise in climate science approach the subject. This is posturing trying to pose as academic debate. Serious scientists wouldn’t touch that style of argument with a barge pole.

Leyland and Carter are acting like defence lawyers desperate to convince a jury that their client — man-made emissions of carbon dioxide — is not guilty. They want to create an illusion of doubt to delay action, and their audience is not the climate scientists of the world, it’s the readers of the Dominion Post. Doubt is Leyland and Carter’s product, a technique honed and refined by tobacco defenders decades ago.

One final point. In my original post, I pointed out that Leyland & Carter’s stated confidence that “man-made carbon dioxide does not cause dangerous global warming and that the predictions of computer models of the climate are worthless” was not supported by 97% of climate scientists — the people with real expertise in the field.

Their response both misquotes me and attempts to hide the pea under the thimble:

“In contradiction, Mr. Renowden asserts that “the vast majority – 97% or thereabouts…would beg to differ with our statement”. This is irrelevant. Science is not concerned with consensus. It is about evidence and hypothesis testing.

What that 97% represents is the balance of evidence. The overwhelming majority of people working in the field, however you choose to measure it, think we have a big problem with atmospheric carbon. Those that don’t are a tiny minority — a crank fringe supported by fossil fuel interests — making their arguments in opinion columns instead of the peer-reviewed literature. The rest of us live in the real world. We’ll ignore their attempts to blow smoke in the face of public opinion, and get on with trying to find a solution.