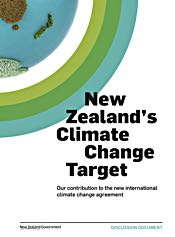 At the end of last week, with the deadline1 for submissions on a post-2020 target for New Zealand emissions rapidly approaching, the Ministry for the Environment released a second set of economic cost estimates for various emissions targets.

These cost estimates are substantially lower, the Ministry admits, than the costs in the consultation document issued by the MfE on May 7th. As it happens, neither the Infometrics modelling used in the consultation document or the newly-published Landcare Research is terribly helpful when considering policy options, as I shall discuss later, but for the time being consider the usefulness of a “consultation” process where the following is true:

If that’s not a prescription for a Mickey Mouse consultation process that’s designed to pay only lip service to public concern, a disgraceful political sham that should have officials — who are expected to be resolutely non-partisan and to serve the public interest — hanging their heads in shame, then I’m a maker of fine Low Country cheeses.

But it gets worse. An examination of the economic modelling commissioned by the MfE shows that the whole process was set up to exaggerate the costs of cutting New Zealand’s emissions.

I am not an economist, and I am most certainly not an economic modeller, so I will not comment on the accuracy or predictive skill of economic models, except to note that they are 1.6 million kilometres2 removed from climate modelling. I always find it most instructive to look at the assumptions fed into economic models, and to assume that the the results the models generate are reasonable within their own limits. So what are the assumptions baked into the Infometrics modelling MfE relies on for its costs projections?

These are what the Infometrics report presents as its “overarching assumptions”:

Given time and budget constraints, the scope of this research does not include any analysis of:

There are a couple of extensions to that list: the Infometrics modelling excludes any domestic pricing of agricultural emissions over the next 15 years, but assumes that they will be included in international emissions accounting. It also ignores — ignores! — what could be achieved by incentivising forestry planting:

Uncertainty in accounting settings makes it difficult to quantify the effect of forestry and land-use emissions and removals for the purpose of the modelling. To avoid distorting the results, mitigation through forestry and land use has not been quantified or included in modelling estimates presented in this report.

Let’s summarise. This is what the economists at Infometrics (and Landcare Research – their assumptions are not too different) were asked to test:

In other words: if we assume that we proceed for the next 15 years with a blindfold over our eyes and our arms tied behind our back, we find that action to cut emissions will be expensive. Who’d have thought it? What a surprise…

That’s bad enough, but there’s more that the MfE’s economic consultants refuse to price. The consultation document points out that there opportunities to be had in a transition to a low carbon economy, and suggests that electric vehicles are an example of beneficial change that’s already happening. But there are many more to be found in low carbon technology development, both biological and physical. NZ is already recognised as a good platform for testing software and services — and that could be true for more than iPhone apps or accountancy services.

What’s worse is that every year we continue down a path that ignores the inevitability of a transition to a net-zero carbon economy, we make action when it finally comes all the more expensive. There is a very real price to be paid for being locked into a high-carbon economy. Tim Groser and John Key are — unwittingly, one hopes — busy turning a drama into a crisis. And it won’t be them that pays the price.

The current government should not be allowed to play silly games with all our futures. They are embarked on an economic and strategic governance failure of epic proportions. I suspect that nothing anyone says in this sham of a consultation will be listened to: but at least what we do say will stand in the public record. Not everyone sank the ship. Not everyone turned a blind eye. Not in my name, Tim Groser.

[Headline, of course, and also Crosby, Stills, Nash & Young, though given where we’re heading Wooden Ships is probably more appropriate.]