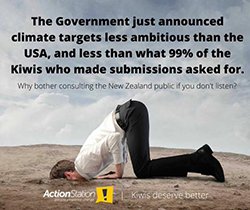 Climate change minister Tim Groser today released New Zealand’s Intended Nationally Determined Contribution (pdf) to emissions reductions after 2020 — a 30% decrease on gross emissions in 2005, equivalent to an 11% reduction on 1990 levels. Groser’s press release described this as a “more ambitious climate change target” and “a significant increase on our current target of five per cent below 1990 emission levels by 2020.” This can only be true for definitions of “ambitious” and “significant” that include doing sweet Fanny Adams. The minister is spinning like a top.

Groser was given free reign to continue his dissembling by Radio New Zealand’s political editor Brent Edwards on Checkpoint this evening. Just before the end of the segment, Groser waxes lyrical about the costs of action — “$1,270 a year” — and then makes this amazing counterfactual statement (roughly transcribed):

The burden of advice from our officials and the independent think tanks that have done the modelling is that this is all cost and it has to be born by someone.

Some facts for the minister: the modelling released by his officials as part of the consultation process, the results of which have been so comprehensively ignored, did not consider the costs of inaction, did not model the co-benefits of action or of innovation, and modelled costs were compared to an unrealistic baseline of no government action to reduce emissions at all.

In other words, the minister was being grossly misleading in what he said. If he does not know that’s what his department’s economic modelling said, then he is failing in his ministerial responsibilities on this most serious of issues and should be held to account. If he does know that’s what the modelling said, but was prepared to misrepresent it to RNZ’s political editor and the wider National Radio audience, then he is guilty of telling a deliberate falsehood, and should resign. Either way, Groser was being glib, arrogant and ignorant — an unedifying sight in a senior minister.

There is no sign in the target announcement made today, or in any part of this government’s climate policy that they understand the true seriousness of the issue that confronts NZ and the planet as a whole. They appear to have no appreciation of the strategic and management blunders they are making, all in the name of keeping semi-mythical costs down. The new target, described by Professor Ralph Sims as “low ambition”, doesn’t even set NZ on course for the government’s own 50% reduction by 2050 commitment, let alone address the need for a more credible 100% reduction by that date.

The legacy that Groser and the Key government will leave to the future will not be a new flag, it will be a New Zealand crippled by their smug, arrogant and morally repugnant climate inaction.

Summary of submissions made to the consultation process.