New Zealand’s merry little band of climate deniers are turning out to be a right bunch of Cnuts. Sea level rise and its implications for Christchurch and the wider world have been making news in recent weeks — as have new projections of rapid sea level rise over the remainder of this century.

So what does a good climate denier do? To stay faithful to their core belief — that climate change isn’t happening, or isn’t going to be bad — they have to argue against policies designed to deal with its impacts, as well as those intended to cut carbon emissions. Sea level rise? Like Cnut, they line themselves up against the waves.

I’ve blogged many times on the challenge sea level rise poses for post-quake Christchurch. The 2011 quakes caused large parts of the city to drop by up to half a metre — effectively delivering decades of sea level rise in a matter of minutes. For some areas of the city tidal and run-off flooding are now commonplace.

The current debate on sea level issues has been prompted by the city council’s long term planning process — which recommends1 that development should be restricted in areas where future sea level rise is expected to cause problems. Not surprisingly, this has some owners of coastal properties concerned that they will lose out. The council has also looked at the idea of building a tidal barrier across the Avon-Heathcote estuary to protect the city.

Local politics and property owner self-interest is bumping into the harsh realities of climate change, leading to a wide variety of responses — including “it isn’t happening”.

Let’s begin by looking at that bastion of mild-mannered, soft-voiced and charmingly polite2 climate denial, Richard Treadgold’s Climate Conversation. In a post titled Expert opinion against exponential sea level rise, Treadgold attempts to debunk fears of rapid sea level rise by bowing to the wisdom of experts. Unfortunately, his “expert” is nothing of the sort, because it is none other than Dr Willem de Lange3. de Lange, regular readers may recall, lists his work for the Heartland Institute’s Not The IPCC report as an academic publication — work that involved plagiarising earlier Heartland propaganda, right down to making the astonishing claim that “the Arctic regions have been cooling for the last half century”.

Treadgold produces a chart that de Lange supplied him five years ago that suggests that there is zero percent chance of one metre of sea level rise over the next century, and goes on to comment:

There’s little chance that in only five years since then these probabilities have altered to any meaningful degree. Prof de Lange is among the foremost ocean scientists in New Zealand. Solid evidence is required to contradict his opinion. I’ll look up the IPCC projections for sea level rise in AR5, but I seem to recall it sits at about 450mm by 2100.

Unpacking all the untruths in just this one paragraph would be the work of another, longer, article, but the short version is that de Lange was dramatically wrong five years ago, that our understanding of the issue has advanced a great deal in the interim, and that to call de Lange “among the foremost ocean scientists in NZ” is to do a grave disservice to the oceanographic community in this country. Harmless gilding of the lily, or slapping lipstick on a pig? You decide.

Just what do we know about current sea level rise, and how it might change in the future? The physical science part of the IPCC’s 5th report is now two years old, and based on papers published up to a year or two earlier than that. A lot of work has been done since, and we are learning a lot — not much of it good news — about the way that the ice sheets of Greenland and Antarctica are responding to current warming. There’s a very good summary of the (very conservative) IPCC report at Real Climate here. Even with deep emissions cuts, a rise of 28-61cm is modelled for the end of the century — with the behaviour of the ice sheets a nasty wildcard in waiting.

And those ice sheets are not waiting. Recent evidence from West Antarctica suggests that large parts of that ice sheet may have passed the point of no return, and are now committed to melt. How long will it take? That’s the really interesting question4…

If we want to know where we’re heading, we can use paleoclimate (climate history) data to help. The last time CO2 was at current levels, 400 ppm, was the Pliocene — a period 4 million years ago when sea level was around 20 metres (plus or minus a few) higher than today. In other words, as long as atmospheric CO2 is at current levels, we can be reasonably certain that we are committing the planet to very substantial long term sea level rise. We just don’t know how long it will take to get there. We could be lucky, and the ice sheets could melt slowly, giving us a few hundreds to thousands of years to adapt. Or we could be unlucky, and see multi-metre sea level rise over the next century.

James Hansen’s latest paper is relevant here, because it is the first to attempt to model what would happen in the event of ice sheet collapse in the near future. Hansen et al point to the rapid increases in ice mass loss on Greenland and Antarctica over the last couple of decades to justify their modelling, and suggest that the impact of collapse would be to cool large areas around Antarctica and Greenland, leading to an intensification in extra-tropical storms as cold oceans rub up against rapidly warming tropics. This is controversial stuff, and far from being a consensus view — but Hansen’s co-authors include many senior researchers in relevant areas, so their conclusions can’t be lightly dismissed.

In recent decades the rate of sea level rise has increased from the 20th century average of under 2 mm a year to 3.3 mm per year, and I am not alone in thinking that there are tantalising hints of an acceleration in the last few years of satellite data: 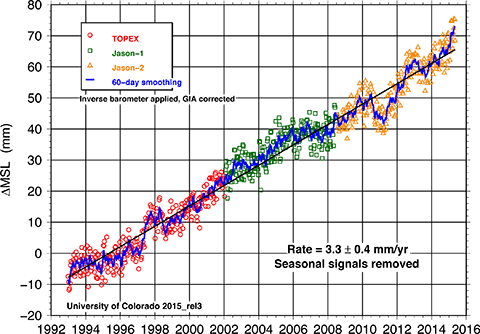 The policy relevant question, therefore, and the one that should be exercising the unlucky people who own coastal properties and the councils who administer their services, is not how much sea level rise there is going to be, because we know there is going to be a lot — but how soon it will make seaside life uncomfortable. That involves making some kind of estimate of risk — and that means staying in touch with what’s happening at the poles, not donning rose-tinted spectacles and pretending that nothing will happen.

For the people of Christchurch this is very much a live question, as can be seen by the council’s consideration of a mini-Thames Barrier to prevent flooding around the estuary, and on the other end of the spectrum in the efforts to demand that the Tonkin & Taylor report be “peer reviewed”. The bad news is that the T&T report would probably now be judged to be optimistic about future rises.

Later this year the Parliamentary Commissioner for the Environment — who reviewed the science of sea levels in a report released last year — will release a second report looking at potential impacts on New Zealand coasts. We can also expect the Ministry for the Environment to release updated guidelines for local authorities on climate change, based on the IPCC’s 5th report. These will feed into local authority planning around the country, and set the scene for what promises to be a series of local battles as those with coastal properties seek to limit their long term (inevitable) losses.

There will be a temptation for coastal landowners to choose their climate information from those who would tell them there is no real problem. The bland science and physics denial that infests the pages of Treadgold’s climate echo chamber might be reassuring for the ill-informed, but if they follow the inexpert advice of the likes of Willem de Lange they will end up paying a steep price.

In Christchurch, the city council and the planners committed to rebuilding the quake-damaged city need to face up to the long term problem of sea level rise. It may not do much harm — or cost much money — to allow people to continue to live in coastal hazard zones, as long as there is no new major development or the construction of infrastructure with a likely service life of more than a few decades. But they also need to think about the location of the city itself. Rebuilding the central city at its current location could turn out to be extremely shortsighted.