By Aimee Whitcroft • 21/09/2012 This post was syndicated from misc.ience » Science - View original source

And, ladies and gentlemen, it’s official!  The winner’s of this year’s IgNobel prizes have been announced and the webcast of the ceremony showed it to be as good-natured and cheerful an event as ever. 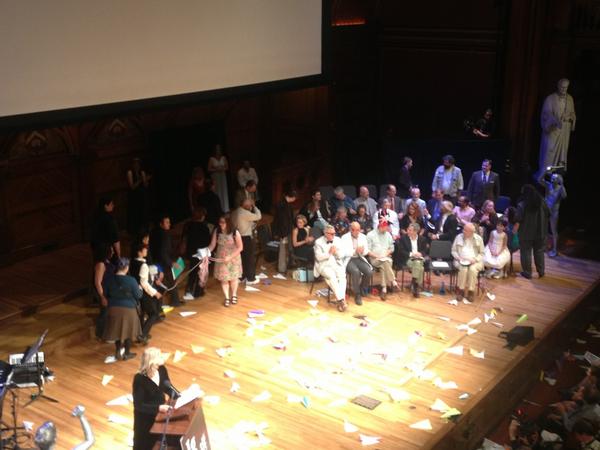 Physics: Keller, Goldstein, Warren and Ball for research into the forces that control the shape and movement of a ponytail

Fluid dynamics: Krechetnikov and Mayer for research into why people spill coffee when walking around with it

Psychology: Eerland, Zwaan and Guidalupe for research showing that people guess the height of the Eiffel Tower incorrectly while leaning sideways (leaning to the left makes people think it looks smaller)

Chemistry: Petterson et al for solving the mystery of why people’s hair turned green in some houses in Anderslov, Sweden (spoiler: it’s from the dissolved copper in hot showers)

Medicine: Ben-Soussan and Antonietti research into how doctors doing colonoscopies can avoid igniting gases and making their patients explode

Acoustics: Kurihara and Tsukada for the creation of the speechjammer, which can, literally, disrupt speech

Anatomy: de Waal and Pokorny research showing that chimpanzees can identify each other (individually!) from photographs of their backsides*

Peace:  Petrov for converting old military explosives into nanodiamonds which can later be used as light beacons for cancer treatments such as chemo.

A number of previous IgNobel winners, as well as Nobel winners, made appearances and gave prizes: I particularly loved the grins on the faces of the (now slightly aged) Featherstones, who garnered the 1996 IgNobel Art prize for the invention of the plastic pink flamingo 🙂

Lest anyone think this is being taken too seriously, the awards also featured two 30 second periods during which people were officially allowed to throw paper aeroplanes onto stage (accompanied by cries of ‘safety first!!’), with some brave soul standing thereon and wearing a bullseye.

More details about the prize winners and their inspiration can be seen in articles from The Guardian and the Washington Post.

One of my favourite elements, apart from the oft-shouted ‘Please stop! I’m bored’ chorus of this year’s _two_ Miss Sweetie Poos, is the 24/7 lectures.

In these, a top researcher is asked to explain their subject twice: first, a completel technical description in 24 seconds (they very seldom get to complete their abstract). And second, a clear summary, understandable by anyone, in just seven words.

Some of this year’s:
Mass spectrometry? “It weighs the bits in your junk”.
The research last year about bacteria living on arsenic? “Only arseholes believe arsenic can support life”.
Why the universe keeps us enrapt? “Because it’s the only one we’ve got”.

There was also a very funny, if odd, opera in three parts titled “The Intelligent Designer and The Universe”. It featured dress-making 🙂

Quiet! I was talking!

The teapot effect, end of (one of my favourites)

* The link points to the New Scientist article about it because the paper itself is behind a paywall, and costs $113 US PLUS TAX!!!!