I think that understanding science is really important, no matter who you are or what your education level is.  Each one of us needs to make scientific decisions every day:

Scientists can be scary and sometimes intimidating, with their endless qualifications and constant use of long words.  I have been working tirelessly on learning the skill of talking about science without all of those scary words so that the conversation can be had by all, not just the elite few.

I’ve been trying to change the perception of scientists by working really hard on a voluntary basis, all in my spare time to take this challenge on.

I do this in several ways:

I do all of the above for free!  Actually it costs me money to do this, my own hard earned money.  I choose to donate 20% of my salary to this cause, so that children have fun experiments to run, so that I can drive to a remote school that doesn’t have a well equipped lab and so that the public can access a scientist to answer the questions that they have.  I have people around me who volunteer and do this for free too, media production companies, owners of venues, parents of children. I am not paid to be on TV or on the radio and that may come as a surprise to you but this is me devoting my life to a cause that I feel strongly about.

Because we do not have dedicated science TV shows on our national channels, it’s quite difficult to get any airtime for the subject.  TV3 has actually been great at offering a weekly 5 minute science slot at 8:15am on Firstline, Wednesday mornings purely for science and The Paul Henry show, although doesn’t commit a regular slot, has been open to having scientists on to chat for 5 minutes about science.

So I’m grateful to the Paul Henry show for allowing me to have some airtime to discuss new discoveries in science.  I also like Paul’s off screen persona and he has been nothing but courteous and respectful to me during the handful of times that I have met him.

Yes, I’m not naive to the reputation that Paul has and I go on to his show prepared for a question that may be slightly off topic or controversial, but I’m an intelligent female who works in a very male dominated field, and I’m used to inappropriate and sexist comments and questions, it goes with the territory of being a female engineer!  Perhaps my past experience of being the only woman in a meeting (and asked to make the tea), or being told that if I want to be taken seriously I need to wear shoes with less of a heel as they could distract the men in the room has made me a little immune to sexism and a little more tolerant of comments that I should be offended by. 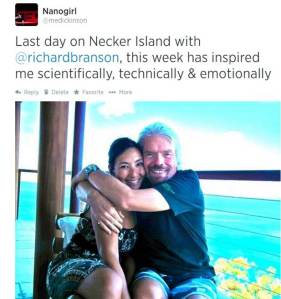 So two weeks ago, I happened to be on Necker Island with Richard Branson and a group of other incredible people talking about science, innovation, entrepreneurship, and business successes.  You may know this because a prominent New Zealand newspaper ran the story, without my permission by taking this photo from my twitter account.
I understand that anything I put out on twitter is public property, and although I was posting it to share my excitement with friends and colleagues, I didn’t think that a whole news story would be created without any input from me.

This caused a lot of media attention and upon my return to New Zealand I chose to give a Campbell live interview to set the record straight and talk about the scientific and technical conversations I had on the trip. Later that week I gave the keynote talk at the Entrepreneurs Challenge in Auckland and at the social part of the event after my talk, a lady came up to me and asked me if I had slept with Richard Branson while on the island.  I’ll admit I was a little taken back by the question, and slightly offended at the implication that I would be the type of woman who would sleep with a married man when I was a smart woman who was there for science.  I immediately said that I did not sleep with him and she shrugged and said “well you know its the question that everybody wants to know”.

I don’t know who “everybody” is, but as the week went on, more and more strangers (both men and women) in the street who recognised me from the media articles asked me the same question.  It made me think about sexism in science and the conversations that I’ve had with many female colleagues about how difficult it can be to gain respect as a female scientist and how we seem to have to jump through many different hoops including how our appearance and personality affects our profile much more it would a male scientists.

When the Paul Henry show asked me if I would come on to talk about science topics last Wednesday, and more importantly for me, about my new 100 days project which I’ve created to address the issues with have with encouraging our children to engage with science I said yes.

Let me tell you that going on live TV is incredibly nerve wracking (I’m not a professional, I’m a scientist), and while I was in the make-up room before going live, I was frantically trying to memorise the facts and figures that I would need to remember about the science topics I was about to discuss.  Paul popped his head in to say hi, and we quickly chatted about the 3 science topics that we would discuss, as he left I said “phew, and here was I thinking that you would be asking me questions about Richard”.

Paul turned and gave me that cheeky look that he has, and I knew that he was up to mischief.  I don’t remember the exact words that were exchanged (because my brain was panicking about remembering the science statistics for the show), nor did I know that the show had planned to show the photo of Richard and I from my twitter account, but Paul implied that he was going to get cheeky with a Richard question and I knew the exact question that had been on everybody’s lips as I’d been asked it so many times already that week.  The producers of the show had no idea Paul was going to go into cheeky mode, I think one of the reasons why he has a late night show is because Paul can be a little unpredictable and very unPC sometimes.

The show went live and I got to discuss the science topics, and then as the slot was wrapping up, Paul asked me in his typical cheeky manner, if I had done the deed with Richard, to which I replied (as I had done many times before) that I hadn’t.  I thought it was funny, I wasn’t outraged and it was the jokey type of question I would expect from Paul on a late night show that had strippers on right after me.

The next day Mike Kilpatrick wrote an article about the incident which set off a media roll and allowed me to read comments from the public about how offended I should have been.

It got me thinking, perhaps I should have been more offended? Perhaps it was sexist? Perhaps I’m not a good role model? Perhaps I should stop making my life hard and just go back to being a boring, non-communicating scientist?

Then I see the e-mails and letters that I get from children who are inspired by what I do and want to do more science, by adults who went to the doctor to discuss a scary lump because I explained the symptoms of a serious disease in easy language on TV, by young girls who now want to be a scientist rather than a Kim Kardashian lookalike.

I realised, that only I can make the decisions on whose show I choose to go on and my reasons for doing that.  Until we can get funding for a prime time dedicated science program accessible to all, scientists like me will keep having to throw in our 5 minutes wherever we can because we feel its important to talk about science.  I know that my comments will mean that others will write negative things about me and my lack of self respect and lack of feminism values and that’s OK, because I’m doing the best that I can with zero budget and nothing but a passion for positive change to drive me.

So that’s my story, and if you are interested in the things that I do that I would like to make news, then yesterday I gave a speech about why I think the New Zealand government should invest more in sustainable R&D for our future economy and I’m also running 100 days of science where I’m encouraging children in New Zealand to have fun with science at home.

Day 4 of 100 days of science, where I held a free science event for children in Auckland (look at all the girls)

So yes, I’ll likely go onto the Paul Henry show again, because it’s one of the few shows that includes science.  How about we use this momentum to address the issues we have with the content of the national TV shows that we fund in this country and push towards funding some more smart science ones?

13 Responses to “Science, sexism and the media.”