To listen to my radio interview on blood glucose monitoring with temporary tattoos, click on the image above.

Anyone who has had to manually measure their blood glucose levels using the finger pin prick method knows that it’s not a pleasurable experience.  For many patients with diabetes, this process needs to happen several times a day, every day to monitor glucose spikes after eating in order to administer the correct dosage of insulin.

The future is looking bright for the replacement of this antiquated pin prick with a high tech skin surface technique based on an old method used by the glucowatch which was discontinued due to skin irritation.  Thanks to researchers in the Department of NanoEngineering at the University of California, the electrochemical technique originally used by the watch has been improved by reducing the current density to solve the skin irritation issue and a smaller, lighter glucose monitor was created.

How does it work? 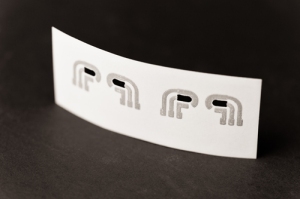 A combination of silver chloride and Prussian blue conductive carbon inks were used to print tiny patterned electrodes onto temporary tattoo paper which was then coated with a layer of glucose oxidase enzyme to create the glucose sensor.

When the temporary tattoo was placed on the skin, the printed electrodes were used to create a mild current (0.2 mA/cm2  for 10 minutes) which caused ions from the skins interstitial fluid to migrate towards the electrodes by a process known as reverse ionotophoresis.  The migration of the negatively charged sodium ions created an electro-osmotic flow which resulted in glucose being transported towards the cathode electrode.  At the electrode, the glucose interacted with the glucose oxidase enzyme resulting in an increase in the measured current giving a positive glucose response.
High glucose sensitivity
Choosing to measure glucose from the skins interstitial fluid rather than blood is not an easy task as the concentration of glucose measured from the skin surface is almost one hundred times lower.  This meant that the specific enzyme used in the tattoo was crucial to create a highly sensitive sensor which could detect these very small change in glucose without being contaminated by measurements from other ions.
What still needs to be done?
This was just a prototype study, and the researchers still need to create an electronic backbone to power the sensor, as well as add signal processing and a wireless communication device to enable remote monitoring, but it does look like a promising device in the rapidly growing world of wearable technology.