Over recent months I have been following, and learning more about, the issues of fluoridation and the Ukrainian civil war. One is a scientific issue (at least in most of the debate), the other political. Yet in the social media discussions both issues are dominated by motivated reasoning, cherry-picking, confirmation bias and outright prejudice. The same thing is going on in both issues and in many cases show denial, the favouring of belief over facts and evidence.

Donald Prothero points out that this is just human nature. We are not “rational machines,” and, if we are honest, we should all be able to recognises these faults in our own approaches, no matter how sceptical and scientific we think we are.

Prothero presented an interesting talk at the recent Amazing Meeting in Las Vegas, he deals mainly with creationism, climate change denial and anti-vaccination beliefs but the lessons have much wider applicability.

He has some great cartoons in his lecture. But I also liked how he drew lessons from his analysis about how supporters of science and scepticism should deal with discussions when science denial occurs. Simple antagonistic argument and debunking is usually not effective. We need to recognise the beliefs and values underlying the denial and respond to those.

TAM2014 – Donald Prothero – The Mind of the Science Denier. 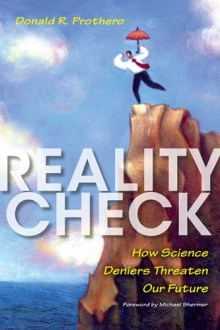 The lecture is based on part of Prothero’s recent book Reality Check: How Science Deniers Threaten Our Future.