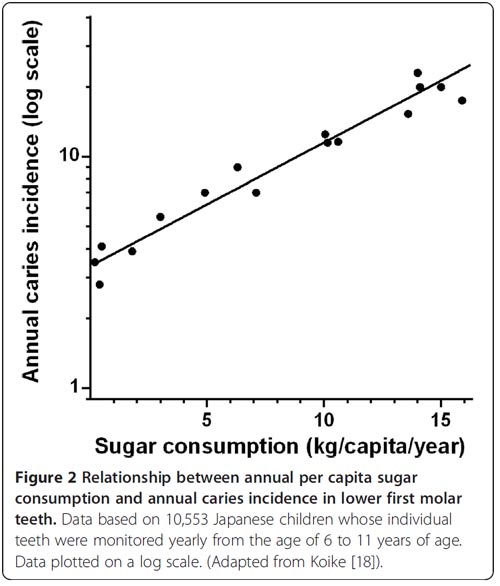 I saw this image in the paper:

Sheiham, A., & James, W. P. T. (2014). A reappraisal of the quantitative relationship between sugar intake and dental caries: the need for new criteria for developing goals for sugar intake. BMC Public Health, 14(1), 863.

It’s a very graphic illustration of the central role played by dietary sugar in tooth decay. Certianly makes one think about how to drastically reduce our dietary sugar intake.

There are a couple of “take home messages” in the paper:

“Sugar is the primary cause of dental caries”

Ths seems to have been debated in the past but is now widely accepted. Because acid attack arising from sugar metabolism is the only mechanism for inducing caries:

“the only confounding factors i.e. tooth brushing and the use of fluoride in drinking water or toothpaste serve to reduce the magnitude of the simple relationship between sugar intake changes and caries incidence.”

However fluoride is not a “silver bullet:”

“although fluoride reduces caries, unacceptably high levels of caries in adults persist in all countries, even in those with widespread water fluoridation and the use of fluoridated toothpastes [21].”

Perhaps we have been underestimating the problem because the apparent improvement in oral health comes from considering data for children:

“The sugar-caries relationship in adults has been largely ignored: all the conclusions on safe levels of sugar and the relationship between sugar and caries are based on children’s data. With fluoride and greater dental care caries has declined in children so some dental authorities have concluded that sugars are not a major determinant of caries provided fluoride toothpaste is use diligently with or without water fluoridation. However, it is now evident that the majority of caries occurs in adults, not in children, because the disease is cumulative and the rates of caries in individuals tracks from early childhood to adolescence and then into adulthood [21,26]. So the conclusion that sugar is not the major determinant of caries, is simply wrong.”

The impact of fluoride

Anti-fluoride propagandists are already quoting this research – using the central role of sugar to imply this proves fluoride is ineffective. But the authors say:

“Fluoride is associated with about 25% lower caries experience when sugar intakes are constant between 10-15%E [10-15% of energy itnake from sugar]  in 12 year-old children [20]. The widescale use of fluoride toothpaste is a reasonable explanation for the decline in children’s caries in many countries since the 1970s, yet what then becomes relatively evident is that caries becomes more prominent in adolescents and adults [4,21].

Ireland has had a mandatory national water fluoridation policy since 1964 but some areas have not implemented the fluoridation policy thereby allowing a comparison within a country where fluoride toothpaste is in widespread use but drinking water fluoride varies. Additional benefits accrued from having fluoride in water as well as toothpastes but 7.3% of even the youngest adults aged 16-24 years with lifelong fluoride exposure still had dental caries experience in 4.6 teeth as did 53% of the 35-44-year-olds assessed 35 years after the beginning of water fluoridation: the mean DMFT was 13.3 and 16.0 in those living in non-fluoridated areas [15]. Australia has water fluoridation in a number of cities, but despite fluoride use from both toothpastes and drinking water the mean DMFT and DF Surfaces for all adults increased; adults aged 65 years and older had ten times higher levels of caries than 15–24-year-olds [16]. Thus although fluoride reduces caries, unacceptably high levels of caries in adults persist in all countries, even in those with widespread water fluoridation and the use of fluoridated toothpastes [21].”

So research is showing a strong need to cut dietary sugar intake by both children and adults.  The authors say “for multiple reasons, including obesity and diabetes prevention, we need to adopt a new and radical policy of progressive sugar reduction.” They conclude:

“that public health goals need to set sugar intakes ideally <3%E with <5%E as a pragmatic goal, even when fluoride is widely used. Adult as well as children’s caries burdens should define the new criteria for developing goals for sugar intake.”

Obviously community water fluoridation (CWF) remains an important issue in New Zealand because political activists still work hard to remove it, or prevent it when health authorities attempt its introduction. It seems to me, though, that CWF, once achieved, plays its important role without having to continually educate and encourage the population to change their dietary habits. The battle over sugar will be so much harder because it will involve social pressure to change personal habits, as well as countering all the anti-science and freedom of choice arguments.

At least local body councils, and immature local body politics, will not play a key role.