Scientists are as human as anyone else. They aren’t immune to jumping on bandwagons, getting bees in their bonnets, special pleading or selectively interpreting their data to support a pet hypothesis or an obsession. The scientific peer review process restrains this human failing somewhat during  normal scientific publishing, but it can get out of hand when there is no such restraint.

Unfortunately Philippe Grandjean demonstrates this failing in a recent post – Mottled fluoride debate on his blog Chemical Brain Drain. This relates to a recent paper of which he is a junior author – . Association of lifetime exposure to fluoride and cognitive functions in Chinese children: A pilot study. I discussed this paper in my article Severe dental fluorosis the real cause of IQ deficits?

So what is wrong with the blog article?

1: Backgound claims about Choi et al (2012) (another paper Grandjean was also a junior author of.

He claims of this paper “children in the high-fluoride areas showed an average IQ 7 points below the controls.” That’s a bit of spin because that paper reported  an IQ deficit of only 0.45 of a standard deviation (7 IQ points is a hypothetical value mentioned in a later explanation). The authors themselves commented:

“The estimated decrease in average IQ associated with fluoride exposure based on our analysis may seem small and may be within the measurement error of IQ testing.”

2: He mentions work reported in the 2014 paper on “exposure assessment and cognitive testing of 51 children.” However, the data for only 43 of these children were actually used (and 3 groups of n=8, n=9 and n=26 compared).

3: He claims that for this group “lifetime exposures to fluoride from drinking water covered the full range allowed in the US.” He is attempting to make the finding relevant to the practice of community water fluoridation (CWF). The usual target for optimum fluoride concentration in CWF is 1 ppm or less. I guess their study covered this range because the lowest drinking water concentration was 1 ppm. As no cognitive defects or other effects were found at that concentration it is stretching things to claim the study (and especially the negative effects observed) is relevant to CWF.

4: He claims the measure cognitive defects were more common than actually reported. He says:

“children with fluoride-induced mottling of their teeth – even the mildest forms that appears as whitish specks on the enamel – showed lower performance on some neuropsychological tests.”

Yet what they specifically reported is that:

5: He indulges in further special pleading with statistical results claiming:

“a New Zealand study that “found that fluoridation is not neurotoxic for either children or adults, and does not have a negative effect on IQ”. This interpretation is rather optimistic, as the statistical confidence limits suggest that a loss of 2-3 IQ points could not be excluded by their findings.”

Well, of course this result doesn’t exclude the possibility – but it is completely inappropriate to use that argument to somehow claim the result proves there is an IQ difference.

This photo accompanies Grandjean’s blog post. Could it be that severe dental fluorosis could contribute to learning difficulties and hence IQ deficits just because of appearance?

Although the numbers in the study were small that conclusion does seem reasonable because moderate/severe dental fluorosis is known to negatively affect the quality of life of children just because of the physical anomaly. That in itself could explain the observed results without needing to invoke some unknown mechanism of chemical neurotoxicity at low fluoride concentrations.

Sixty percent of the children in the Choi et al., (2014) study had moderate/severe dental fluorosis. The graphic below demonstrates that situation is very different to what exists in countries using CWF. The areas reviewed (Choi et al., 2012) and studied (Choi et aql., 2014)  are areas of endemic fluorosis. There results are of course relevent to those situations but should not be naively extrapolated to areas using CWF. 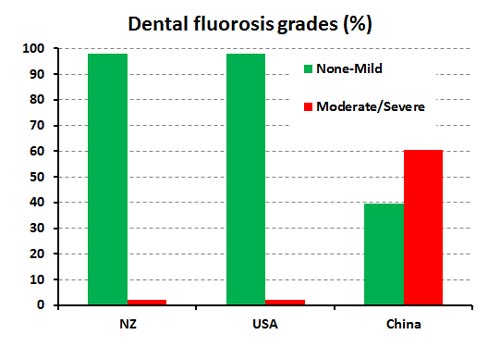 Unfortunately Grandjean and Choi et al., (2014) seem unprepared to consider the possible effect of negative appearance connected with severe dental fluorosis on learning and hence IQ of children. They seem unwilling to consider any hypothesis except their favoured one of chemical toxicity. For example, Choi et al., (2014) are “planning a larger scale study to better understand the dose–effect relationships for fluoride’s developmental neurotoxicity.” Surely that is a blinkered approach.

Similarly Grandjean and Landrigan (2014), in the Lancet paper which anti-fluoride propagandists love to promote, were on thin ice to declare fluoride a neurotoxic element. The only evidence they used for this was the Choi et al., (2014) study where non-chemical factors like negative appearance could be involved. This paper was subsequently criticised in a later issue of the journal. However, its original publication, despite its special pleading, indicates faults in the journal’s peer review process (see and Repeating bad science on fluoride and Controversial IQ study hammered in The Lancet).