This video has been making the rounds lately. It is a view of the sun, the camera moving back at the speed of light – illustrating in realtime, the journey of a photon of light emitted from the surface of the sun and traveling across a portion of the solar system – from a human perspective.

The animation ends at Jupiter Even so, it certainly illustrated to me that interplanetary travel is going to get extremely boring without lots of things to occupy the travellers. They won’t be travelling this fast.

Credit: Thanks to RT: Seeing stars: Traverse Solar System at speed of light

Phil Plait gave another perspective of distances in space in his article Can You Really Fit All the Planets Between the Earth and Moon?

He answers the question with a Yes – sometimes! 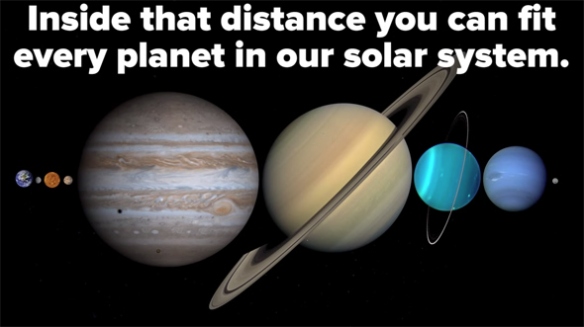 At most times the planets just do not fit.

At lunar apogee, the planets do fit, rather comfortably. And there’s more: I used the average diameters of the planets. Most of the planets are not spherical, but due to their rotation they’re oblate, or squashed; smaller in diameter through their poles than across their equators. We can make them fit better if we align them through their polar axes. That total distance is 364,799 km. That’s still too much if the Moon is at perigee, but gives us a little more breathing room when the Moon’s at apogee.

Finally, we can look at the average distance of the Earth to the Moon, which is 384,400 km, or 376,000 km surface-to-surface. In that case the planets fit if we align them pole to pole, but not using their average diameters.

0 Responses to “A perspective of distances in space”