Attention-Deficit Hyperactivity Disorder (ADHD) is more likely linked to residential altitude than community water fluoridation (CWF). This finding calls into question a recent paper claiming ADHD is linked to CWF. A paper that is being heavily promoted on social media at the moment by anti-fluoridation groups.

I discussed problems with that paper, (Malin & Till, 2015) in my article More poor-quality research promoted by anti-fluoride activists. Now I have taken my critique further by making my own exploratory investigation of likely influences on the prevalence of ADHD in US states using the approach of Malin & Till,(2015). Except I did not limit my investigation to CWF  data but also included state prevalence data for other likely influences on mental health. 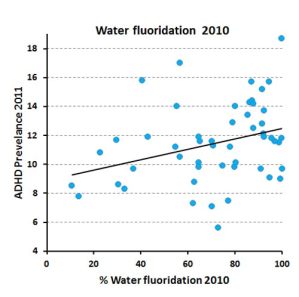 For comparison, the similar correlation of ADHD state prevalence in 2011 with prevalence of CWF in 2010, while significant, has a correlation coefficient of +0.32 and significance of 0.02. However, the correlation with CWF is not significant in a multiple regression with elevation – see below.

Other factors worth considering

My exploratory statistical analysis showed a number of other factors significantly linked to ADHD with correlations similar to, or higher than, CWF. Images for the data and a table of correlation coefficients and their significance are shown below.

The correlations of ADHD state prevalence with educational attainment (Bachelors degree) 2009 and Per Capita personal income 2010 were similar to that with CWF. These correlations are negative – I guess its easy to understand that higher incomes and better education is conducive to better mental health (lower prevalence of ADHD).

The table below summarises correlation coefficients (r) and statistical significance (p) for the figures above.

Correlation of ADHD state prevalence with a range of factors

Malin and Till (2015) use the CWF for 1992 in most of their comparisons. My analysis shows this has a better correlation with ADHD prevalence in 2011 than CWF for any other year (r=0.45 cf 0.32 for CWF in 2010). It seems strange to use 20 year old data in  a model predicting ADHD prevalence for 2011 so I used more recent data for my exploratory analysis. However, in a multiple regression the contribution from CWF in 1992 was still not statistically significant (p= 0.158).

We should be careful of conclusions arising from such exploratory investigations. Firstly the obvious – correlation is not causation. But secondly the choice of data  is crucial.

Malin and Till (2015) chose to consider CWF prevalence as the main factor influencing ADHD prevalence. They did also include socioeconomic status (SES) as a secondary factor.  However, my analysis shows a number of other factors which could equally be considered. And when they are considered in multiple regressions the contribution from CWF is not statistically significant.

The model used by Malin and Till (2015) using CWF in 1992 and SES in 1992 explained only 31% of the variance of ADHD prevalence in 2011. The corresponding firgures for ADHD prevalence in 2003 and 2007 were 24% and 22%.) But using a model for the influence of mean elevation, home ownership and poverty only (no CWF included) I was able to predict the state prevalence of ADHD in 2011 as shown in this figure. This accounts for 48% of the variance and has a significance of p= 0.000. Perhaps further exploration of the available data could produce an even better model but the key point here is that CWF does not contribute anything once mean elevation is included.

I do not think Malin and Till (2015) are justified in drawing the conclusion that CWF influences ADHD. Their mistaken conclusion has arisen from their limited choice of data considered for the exploratory analysis. That in itself seems to have resulted from a bias inherent in their hypothesis that “fluoride is a widespread neurotoxin.”

0 Responses to “ADHD linked to elevation not fluoridation”