Fluoride Free NZ (FFNZ) promotes a list of “NZ Health Professionals who are calling for an end to fluoridation.” I am generally cynical about such endorsement lists, but the details in this list do give a picture of the commercial and ideological alignment of the FFNZ supporters and activists. So I did my own analysis, dividing the list into those described as “Science and Environmental PhD Professionals”, “NZ Dentists, “NZ Doctors” and Alternative health professionals (Chiropractors, naturopaths, Homeopaths, etc.). Of course, this is approximate as, for example, some listed as doctors may have specialised in one or another alternative fields. The pie chart below shows the distribution of FFNZ supporters among these groups. 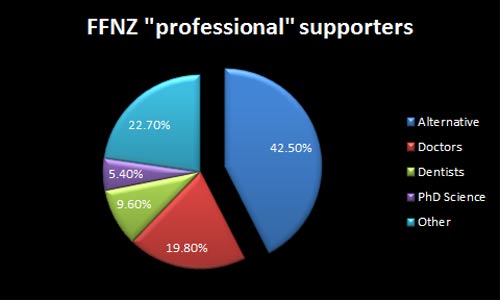 Clearly with such a large proportion of supporters coming from alternative health fields this above distribution is not representative of professionals in general, let alone health professionals. However, anyone who has looked at the anti-fluoride movement or debated with anti-fluoride activists would not be surprised as “natural”/alternative health arguments and sources are frequently used. I wonder, though, to what extent local body councillors are aware of this commercial and ideological orientation when considering submissions they get on the fluoridation issue. I suspect they aren’t. Yet groups like FFNZ engineer these submissions from their supporters – often providing templates for individuals to sign – and usually dominate the submission process. Personally I think this is a defect in our system of representative democracy – councils should actually insist on declarations of conflict of interest, details of employment and commercial interests from submitters. Their failure to do this explains how some local bodies, like the Hamilton City Council, have unwittingly been captured by ideological and commercial interests from the “natural”/alternative health industry during such submission processes.

Declaration of conflicts of interest and details of employment, etc., may to some extent help identify big business interests financing this sort of submission in future. At the moment, we are largely left to speculate. However, there are financial data available showing the money trail involved in at least one anti-fluoride campaign – the High Court case against  the South Taranaki District Council aiming for a judicial review of a decision to fluoridate water supplies in Patea and Waverley (see Who is funding anti-fluoridation High Court action? and Corporate backers of anti-fluoride movement lose in NZ High Court). This action was taken by New Health NZ – an incorporated body set up by the NZ Health Trust – In November 2013. Statements of financial performance of these two organisations are available online and show the following movements of large amounts of money during the year to March 2014.

As the NZ health Trust is a lobby group for the “natural”/alternative health industry the grants it receives must come out of the profits of this industry which is actually a big business in New Zealand. Although the financial statements do not identify sources and recipients the $100,00 grant to New Health NZ clearly came from its parent body and is included in their declared $125,ooo grants and donations. The $95,156 paid out by New Health NZ in professional and consulting fees would have covered the costs involved in their High Court action. So this is a clear example of pretty direct funding of anti-fluoride activity (the High Court action) by corporate interests – the “natural”/alternative health industry. But none of the reporting of this High Court action identified the commercial interests involved. Readers were given the impression that New Health NZ was just another one of these anti-fluoride activist groups and possibly assumed funds for the legal action came from donations. Again, this is a flaw in our representative democratic system. There should be more transparency of financial links. Corporate interests should be able to hide behind astroturf organisations and the dishonesty that their actions are the result of concerned citizens and not the ideological and commercial interests of big business. Similar articles