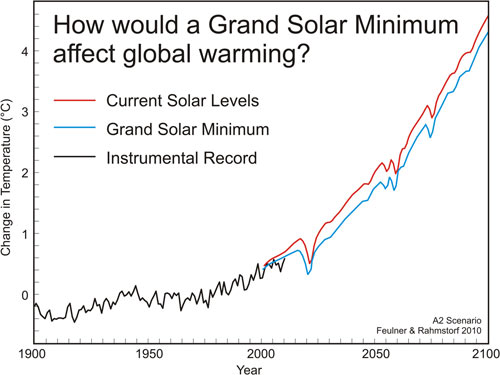 Irresponsible and misleading reporting of scientific issues always annoys me. But I have been particularly annoyed with the recent headlines of the sort “Now it looks like we’re in for an ice-age.” Here reporters have taken it on themselves to naively extrapolate research on the modelling of solar cycles to predictions about climate. Without considering any of the whole complex of inputs into climate change.

I would have thought  with all the controversy, and political and scientific discussion, about climate change over the last few years, that even the most junior reporter would recognise this complexity. That they would not make such naive extrapolations. And, particularly, they would completely ignore the role of the major recent inputs into climate change – anthropogenic atmospheric carbon dioxide.

The research sparking the media reports was published last year –  Sheperd et al., (2014). Prediction of Solar Activity from Solar Background Magnetic Field Variations in Cycles 21-23. This paper does not talk about climate – in fact, it doesn’t even include the word temperature. Nor did the Royal Astronomical Society press release referring to this modelling work (see Irregular heartbeat of the Sun driven by double dynamo).

Yet the  media article linked above claims the researchers say “fluid movements within the Sun will converge in such a way that temperatures will fall dramatically in the 2030s.”

Of course, if the solar model reported in this paper is accepted by other researchers it will be used in  modelling of future climate change. But we can get an idea of the likely effect of including this solar model from what  such modelling has shown in the past (see What is causing warming of the earth?)

Better still – the figure above is from Skeptical Science – using data from Feulner & Rahmstorf (2010). This shows the predicted future temperature of the earth modelled using current solar levels and the grand solar minimum of the sort predicted by Sheperd et al., (2014).

So much for the claim we are headed fo a “mini-ice age.”

A grand solar minimum would barely make a dent in human-caused global warming
Media Reports The World Will Enter A ‘Mini Ice Age’ In The 2030s. The Reverse Is True.
No, Earth is not heading toward a ‘mini ice age’
The ‘mini Ice Age’ media sensation – and the reality