Many anti-fluoride campaigners and their sympathisers use “filters” to remove fluoride from their tap water. Despite this, they will often claim the procedure is “too expensive” for the ordinary person – or that it is ineffective.
Fluoride Free Nelson (FFN) combined both reasons in this exchange on their Facebook page.

But she is wrong on both counts. Suitable water filters can be relatively cheap (just do an on-line search  to check this out) and they just do not work by filtering out particles. The argument that fluoride “is so small most filters do not remove it at all” is naive. FFN does not understand how these systems work and her advice is completely unreliable.

Firstly, The word “filter” is commonly used but is technically not correct for “filters” that remove fluoride. Filtration is usually understood to involve removing particulate matter, and not soluble ions. The actual mechanism of fluoride removal is not by filtration of particles.

Yes, some “filters” do not work with fluoride – because they are not intended to. Activated charcoal is great for removing organic matter and tastes – but is not mean to remove anions like fluoride.

Apart from distillation, there are three ways for the ordinary consumer to remove fluoride and similar anions from tap water – anion exchange, surface adsorption and reverse osmosis. Here is a brief description of each method but readers can also refer to a useful local report: 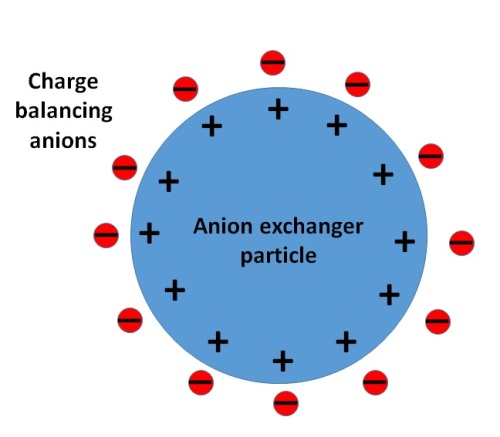 Anions like fluoride in the tap water replace the existing charge-balancing anions on the exchanger. For example:

Fluoride anions in tap water replace chloride anions on the surface of the anion exchanger.

Of course, these anion exchange cartridges eventually become saturated with fluoride or other anions being removed, and their efficiency drops. They are then replaced or recharged by flushing with the proper salt solution.

Interaction of fluoride anions and anion exchangers is basically a physical electrostatic one. But some filters rely on a chemical interaction where the fluoride anion reacts with the surface to form a chemical bond. Absorbents like bone char and alumina are common.

Bone char is made from cow bones and is a high surface area, porous calcium phosphate (apatite) providing active calcium for reaction with fluoride. Alumina provides a surface containing active aluminium which reacts with fluoride.

The chemical reactions occurring at the surface of these materials are of the form:

The efficiency of both the anion exchange and surface adsorption methods can be improved by the way the filter is set up, the use of pre-filters, etc. And by regular recharging or replacement of cartridges.

This relies on the ability of certain semi-permeable membranes to allow transport of water molecules but not ions like fluoride. So much for the naive concept that fluoride anions are too small to be filtered out of water.

That creates an osmotic pressure. Reverse osmosis involves applying pressure to the sugar or salt solution (or whatever solution needs purifying). This causes pure water to flow through the membrane and the contaminants to stay behind providing a way of removing ions and molecules from the original water.

This schematic animation shows how reverse osmosis works in practice – although the membranes are rolled into cylinders to provide a greater surface area and increased efficiency.

Consumers can use either of these methods to remove fluoride from tap water if they choose. While the equipment varies in price and sophistication, like any household appliance, relatively cheap systems are available.

These do work – just beware of claims made about low efficiency as often measurements are made with inappropriate “filters” like activated charcoal, or on systems that have been used for a time and need recharging.

That “freedom of choice” we keep hearing about is available and it is relatively cheap.

0 Responses to “‘Filtering’ out fluoride”