The latest instalment of the Planet of the Apes franchise (Dawn of Planet of the Apes) has hit New Zealand’s cinemas, and this prompted me to think of whether science could really envisage the rise of the apes over mankind.  A quick trawl through some recent science publications provides interesting insight on three big question related to this:

Could apes become smart enough to rival humans?
We are genetically only a fraction different from our closest ape cousins, so it is interesting to speculate if they could match our intelligence.  A study released this week by a team at Georgia State University in the USA, investigated the genetic contribution to intelligence in apes (Hopkins WD, Russell JL, Schaeffer J (2014) Chimpanzee Intelligence Is Heritable. Current Biology http://www.sciencedirect.com/science/article/pii/S0960982214006770).
They tested intelligence among 99 chimps aged between 5-54yo, all of whom were related to varying degree – from siblings through to 4th and 5th cousins.  They were given cognitive challenges using puzzles and tools to assess their intelligence.  Strikingly, patterns in intelligence were highly correlated to relatedness among individuals – indicating a genetic, and therefore heritable component to this intelligence.
About 50% of the difference between chimps intelligence was genetic. In contrast human intelligence is approximately 30% explainable by genetics in children, and 70% in adults (because adults are less sensitive to environment). Experts believe that this represents a similar level to that observed in the chimp study.  In another recent study by a British group, the  “smarter” chimps were found to have a specific variant of the gene AVPR1A – which is associated with social behaviour in humans (See Nature News: http://www.nature.com/news/chimpanzee-iq-starts-in-the-genes-1.15533).
Apes can therefore evolve to be more intelligent, but whether they could rival humans is debatable, and the extent to which gene pools outside of the captive test population possess this intelligence variant remains untested.
Could a “simian flu” virus wipe out humans?
In the movie, a simian flu decimates human populations.  This is of course very plausible – we already live with HIV (the virus that causes AIDS) which made the leap from apes to humans several decades ago, and more recently influenza viruses have crossed from fowl and swine hosts to humans.
If a deadly pandemic disease had arisen a century earlier before modern diagnostics and medicine,  it might have more devastating impacts – consider the Spanish flu in 1918 that is estimated to have wiped out 40-100 million people, more than the total deaths during World War I.
This is why the WHO is so concerned with newly emerging pathogens such as bird flu variants because they have the potential to become pandemic (see for example the excellent work by Gavin Smith’s group in Singapore: https://www.duke-nus.edu.sg/content/smith-gavin-jd).  So a “simian flu” could greatly affect human populations but the heterogeneity in our human gene pool means that as a species we would likely still survive.
Could apes develop a complex ‘society’?
The mixed ape societies of the movie include chimps, gorillas and orang-utans – but this mixed society would be unlikely to develop because these species have such different lifestyles and communication – think how difficult it is for humans as just a single species to get along with each other!
As a geneticist, I also like to think that we could recruit some allies:  Apes such as chimps and bonobos are more closely related to humans than gorillas and so they could possibly join our side which might even things up a bit – although a gorilla still has 6 times the upper body strength of a human!
Read the Mediaworks article and see my “Science Chat” segment on TV3’s Firstline show at: http://www.3news.co.nz/Could-damn-dirty-apes-one-day-rule-the-planet/tabid/1160/articleID/352874/Default.aspx 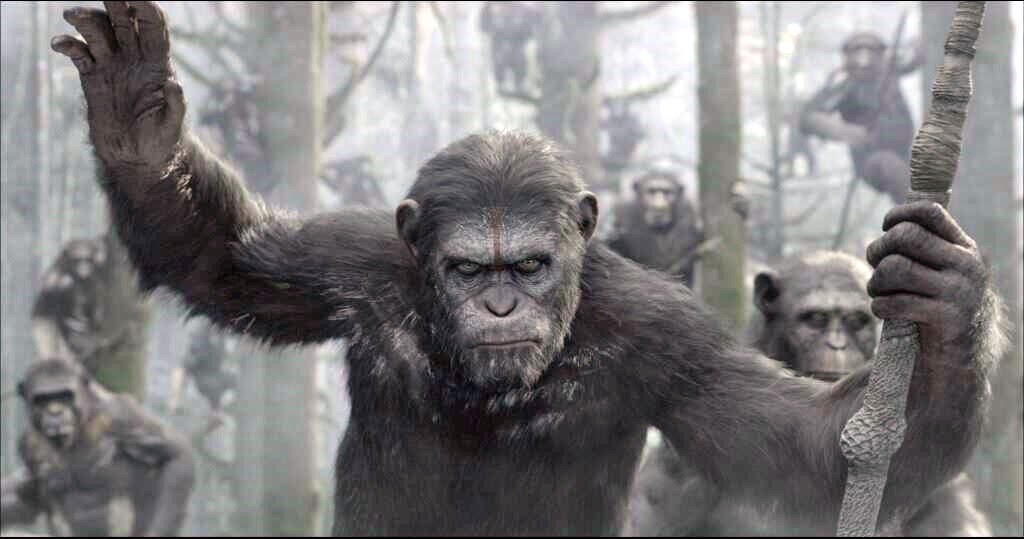