Replacement organs
A team led by MRC researchers in Edinburgh has achieved something astonishing – they managed to induce growth of a fully functional organ in a deficient mouse (see this week’s Nature Cell Biology http://www.nature.com/ncb/journal/vaop/ncurrent/full/ncb3023.html).  This was achieved by reprogramming cells called fibroblasts, obtained form a mouse embryo.  The new cells were induced to become thymus cells (the thymus is an organ located near the heart that produces T cells, which are important in our immune response).  When the thymus cells were implanted into a mouse host they developed a new thymus that produced functional T cells. Given that mouse models are used as a proxy for human systems, it is exciting to think of where this might lead – possibly regenerating vital organs in patients one day?

Why do human children grow so slowly?
A US study this week solves a longstanding paradigm in human development – why do human children develop so slowly compared to other mammalian species?  Indeed their comparative rate of growth is more similar to that of reptiles, which many parents will be thinking could explain a lot!  Comparison of glucose utilisation (this is the only ‘food’ the brain can use) using PET scanning, and MRI scans to estimate brain volume; researchers identified that in infants a huge percentage of the body’s energy budget is diverted to brain development.  This peaks at around age 4 years old, when approximately two thirds of the body’s energy is serving the brain.  This is attributed to the complex architecture of the brain, densely packed neurones and their complex synaptic connections which are metabolically ‘expensive’ to build.  It also explains why humans have evolved to have long childhoods – we need them in order to allow our superior brains to develop.  Read more in this week’s issue of PNAS: http://www.pnas.org/content/early/2014/08/21/1323099111.

Zombie ants?
The Cordyceps fungus is a parasite of arthropods that grows until it bursts out of it’s host body in macabre mycelial protrusions and eventually kills it.  It is common in forest insects of warm climates and has long been prized for its anti-cancer properties in traditional Chinese medicine.  A new study reported in BMC Evolutionary Biology this week (http://www.biomedcentral.com/bmcevolbiol)) reveals how the fungus can induce a zombie-like state in its host, manipulating the ant’s behaviour to the parasite’s advantage.  In a suitably grizzly-sounding experiment, ant brains were dissected out and subjected to fungal infection in the laboratory.  Researchers observed that the fungus produced neuromodulatory compounds that mimicked the ant brains own signalling chemicals, and were essentially overriding the ants brain commands with their own nefarious instructions – which included behaviour designed to increase infection of more individuals, such as biting other ants and dying near to the ant colony.  No need to worry just yet about human brains being infected though – each species of fungus can only produce neuromodulatory compounds specifically tailored to a single ant host! 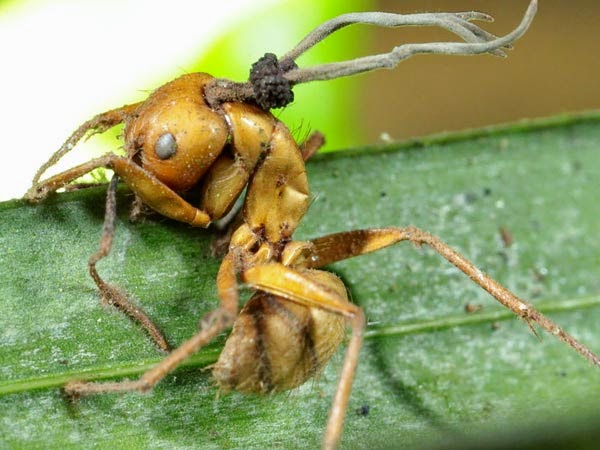