Happy Valentine’s Day everyone – If, like me, you are an old romantic at heart then you will be looking forward to the soppy card and perhaps a little gift today.  Bear in mind, however, that all those feelings of love we experience are down to SCIENCE!
As people fall in love they experience three stages: Lust, Attraction, and then Attachment.  Each of these is influenced by a specific set of hormones.  The feeling of lust needs no explanation but is controlled by levels of testosterone and oestrogen in both women and men.  The attraction stage is when you feel ‘love struck’ and the object of your affections dominates your thoughts.  This is thought to be controlled by three neurotransmitters – adrenaline, serotonin and dopamine.  When your heart races at the sight of your new love – that’s the adrenaline working! Dopamine is a ‘pleasure’ chemical, and also plays a role in that ‘can’t eat, can’t sleep’ feeling when you are in love.  Serotonin is an important love chemical, and may be responsible for causing pre-occupation with your new love.  Finally comes attachment, that feeling of love that comes with shared experience and time.  Two hormones thought to influence this are oxytocin and vasopressin. Oxytocin is widely known as the ‘orgasm hormone’ as it is released at sexual climax, but it is also thought to promote that ‘cuddling’ urge and promotes mother-infant bonding.  Vasopressin is released after orgasm and is also linked to attachment bonding.
How do we know this? – well mostly due to study of the amorous activities of rodents – which kind of gives a new meaning to the term “love rat” in my view!  Rodents that have blocked oxytocin pathways reject their young, whereas giving oxytocin to motherless rats can stimulate them to nurture the young of others.  Similarly prairie voles (which like humans have sex for fun as well as procreation) stop their promiscuous activity if vasopressin levels are suppressed with drugs.  Rather worryingly, there are a few anecdotal stories of this being adapted to ‘control’ love in humans.  The NZ Herald reported this week that one orthodox Jewish community administered anti-depressants to young people to lower their libido (through the neurotransmitter manipulation that these drugs cause).  A more speculative angle was whether feelings of love could be ‘cured’ by using drugs to manipulate the body’s neurotransmitter and hormone levels (http://www.nzherald.co.nz/lifestyle/news/article.cfm?c_id=6&objectid=11400698).  This was suggested as one possible treatment for people in abusive relationships – but this sounds like a very drastic and rather Orwellian ‘cure’ to me.
So to everyone out there who is in love today – enjoy the feeling, but do spare a thought for your hard working hormones and also the countless rats that were sacrificed in order to bring these findings to your attention.  As a staunch anti-vivisectionist (I am proud to have never killed an animal for my research or teaching during almost 30 years in science) I am going to be sending my love to those gallant rodents as well as my whānau today! 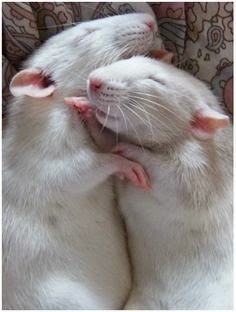