An intriguing new paper appeared in Nature this week, entitled ‘Complex archaea that bridge the gap between prokaryotes and eukaryotes’ (abstract and author details at: http://www.nature.com/nature/journal/vaop/ncurrent/full/nature14447.html
So what’s all the fuss about? – surely the widely held view that simple prokaryotic cells (the domains Archaea and Bacteria, which are what most people would know as simple unicellular ‘microbes’) gave rise to the more complex eukaryotic cells (the domain Eukarya which includes everything else from protists to plants and animals) is well established and needs no further insight?  Well not quite…
There has been significant controversy over whether the archaea evolved ‘gigantism’ as cells and then subsumed bacteria that became mitochondria and chloroplasts – to create eukaryal cells, or whether they evolved as separate lineages form a more distant ancestor (see Nature Reviews Microbiology 8, 743-752,  http://www.nature.com/nrmicro/journal/v8/n10/full/nrmicro2426.html). 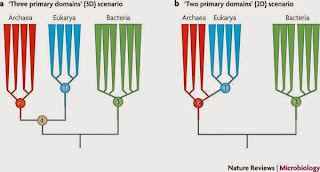 The new study offers evidence that archaea indeed do represent an ancestral state, with a monophyletic lineage between the newly discovered archaeal phylum Lokiarchaeota and euakrya.  The phylogenomic evidence is quite compelling, with GTPases (involved in phagocytosis, a eukaryal trait) and actins (implicated in complex cell structure) suggesting the new phylum represents a ‘starter kit’ towards greater cellular complexity and eventual eukaryal cells.  Coupled with the ribosomal genes showing the greatest affiliation to eukaryal ribosomal genes of any archaea studied to date – this makes a fairly convincing story.  Of course nobody is suggesting that the Lokiarchaeota, discovered near a deep sea hydrothermal vent off the Norwegian coast, are an extant missing link. Rather the evolutionary relationships suggest that the ancestral state did exist and can reasonably be expected to represent a transitional stage towards eukaryal cells.