NASA announced exciting news today that the Kepler space telescope has identified the most ‘earth like’ planet to date.

So what does this actually mean? And is it really that exciting?

This is a breakthrough for Kepler, because although it has discovered thousands of exoplantes (planets orbiting other stars) since 2009, only 12 of these have been remotely Earth-like, with a size less than double our own planet.

In addition, these have all been found orbiting dwarf stars with far lower luminosity than our sun.

Kepler 452b is different: it orbits a G class star which has a similar temperature and mass to our sun, although it is 20% brighter. The planet is less than twice earth’s size and has an orbit very similar to our Earth, and so it sits comfortably within the ‘habitable zone’ that allows the essential basic conditions for life – most important of which is the presence of liquid water.

This is often called the ‘goldilocks’ zone because it describes an orbit not to close (too hot) and not to far away (too cold) for liquid water to exist.

The surface of Kepler 452b receives 10% more solar energy than Earth, but this is probably not prohibitive for photosynthetic life similar to our own. It has also been in the habitable zone for billions of years longer than Earth and so the timeframe for life to evolve exceeds that of Earth. Regardless of whether Kepler452b supports life, I think what is truly exciting is that this is really the nearest thing to Earth that humans have ever found – and it really raises the stakes in the debate about whether or not we are alone in the universe.

I suppose what everyone wants to know is: Could humans survive on Kepler 452b?  Possibly, we would get quite a suntan from brighter star, and the gravity is much greater but probably not be prohibitive to us physiologically.

The the jury is still out as to whether it has a rocky liquid or gaseous surface – so that may require some adaptation!  There is of course also the issue of getting there.  If we traveled at the speed of the fastest human-constructed spacecraft (NASAs New Horizons) it would still take around 94 million years to reach Kepler 452b!

This image shows the scale of Kepler452b’s solar system (and an earlier discovery Kepler 186) relative to our own (Image credit: NASA): 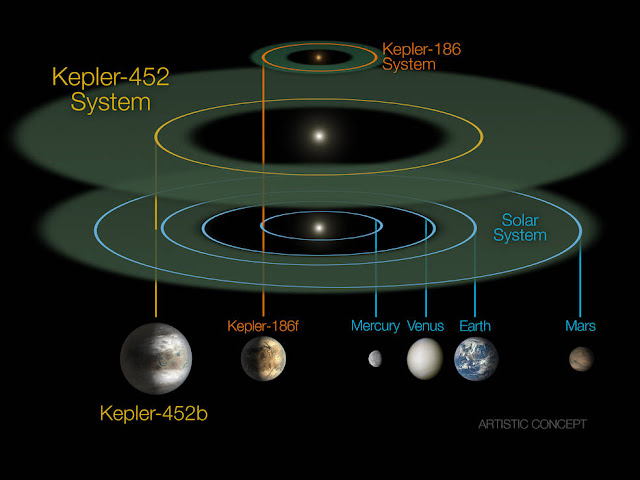