– why getting rid of domestic cats will not result in more rats killing more wildlife. One of the leading cautions after Dr. Gareth Morgan’s call for controls on cat numbers and ownership was the concern that if cat numbers were reduced other predators of native wildlife, especially rats, would increase in number because cats also eat rats.

Cats might control rats not just by killing them but also because rats fear cats and avoid areas where cats are. Indirectly as well as directly, therefore, the cat might protect native wildlife.

Cats might be like ‘the mob’. They protect native wildlife but extract a high price for doing so. The price cats’ demand just isn’t as high as the price that more rats would extract. Indeed, in New Zealand wilderness, rats are feral cats’ preferred prey. Cats will hunt rats even when the rats are uncommon and hunt birds only secondarily. Birds are a less attractive meal than rats. They have less meat and fat on their bones and are harder to catch because they fly [2].

One very important and blindly obvious reason… US! – you and me. 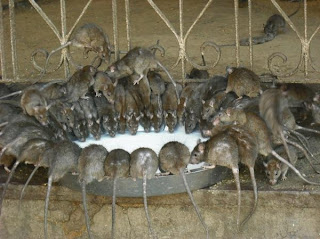 The ecosystem that domestic cats live in is very different from wild ecosystems because people live there. In the ecosystem where we live, work and play we already control rats for lots of reasons and the protection of native wildlife does not rank highly among them.

Unlike the debate about domestic cats predation on wildlife which appears to divide New Zealand, we are united in our disgust of rats. People have killed and controlled rats for as long as we have been people. Cat owners and conservationists are united in their loathing of feral rats.

A reduction in cat numbers is unlikely to result in a widespread increase in rats to levels that would impact native wildlife in urban and agricultural landscapes because people are highly motivated to kill rats. A rise in the rat population would not go unnoticed by the rat-hating human population. Any increase in rats would be met by an increase in trapping and poisoning by people in all the ways we already do and including the new hi-tech traps now available.

Urban ecosystems are different from wild ones – mainly because people are a major predator of all things great and small – but especially rats.

Next post: ways of reducing domestic cat predation of wildlife. Some ways are more acceptable, feasible and effective than others. Success will require multiple approaches and tools.

0 Responses to “When the cats away… … people do the killing”