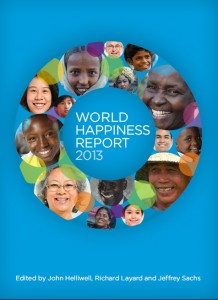 According to the just released “World Happiness Report 2013”, New Zealanders are among the happiest people in the world, ranking 13th out of 156 nations examined. Actually only seven countries appear to have significantly higher (happier) rankings than New Zealand (where the confidence intervals for the ranking scores clearly don’t overlap). These include the four Scandinavian countries, two European countries (Netherlands and Switzerland) and Canada. The source of the New Zealand data is the two-yearly New Zealand General Social Survey (NZGSS), run by Statistics New Zealand.

This Happiness Report is not light-weight fluff – far from it. One of the authors, Jeffrey Sachs (Director, The Earth Institute, Columbia University) is a world renown economist, and it is published by the United Nations Sustainable Development Solutions Network. There has also been a growing (re)focus on happiness as the goal of living and public policy, superseding a consumerist trajectory since Adam Smith that has focused on GDP and a ‘particular’ take on utilitarianism. Indeed, the Report contains a fascinating chapter on restoring ethical concerns into metrics of well-being – such as happiness.

Of note from a health perspective, is the chapter in this Happiness Report on mental health which details “that mental health is the single most important determinant of individual happiness (in every case where this has been studied)”. It notes that “cost-effective treatments exist, but even in advanced countries only a third of those who need it are in treatment.”  The evidence-base on prevention is perhaps not as strong, but developing.

As detailed in this Public Health Expert Blog previously, New Zealand data also indicate the importance of mental health. The Ministry of Health’s Burden of Disease Study found that “anxiety and depressive disorders” were the second most important cause of health loss after coronary heart disease. Actually for New Zealand women they were the first cause of health loss, ahead of heart disease.

As life expectancy keeps on rising, quality of life – and mental health in particular – should assume greater importance in prioritising what we do and fund. Fortunately, there seem to be many cost-effective interventions to address mental health and substance use disorders (as reported by a recent study in the Lancet). Alcohol control interventions appear to be particularly cost-effective (as per this systematic review).

“…the need to switch public spending towards “prevention” rather than “care.” Becoming ill, physically or mentally, can reduce happiness significantly and in some cases, recoveries can be very lengthy and far from complete. Money spent upfront, for example on improved education, resilience and emotional intelligence, and preventative measures like malaria nets, can allow people to live healthier, more fulfilled and more productive lives. Wellbeing clearly leads you to focus on asset-based approaches to policy rather than deficits. This applies to many areas of policy other than health, e.g. asset-based community development vs. multiple deprivation approaches.”

The focus on well-being in this Report is of interest, and the overlap with health issues is certainly of importance. Nevertheless, from a public health perspective it seems that the scientific measurement of well-being is less developed methodologically and arguably less robust than such health metrics as “disability-adjusted life years” (DALYs). For example, many measures of well-being are subjective, which creates all sorts of problems with comparisons between people, over time and between populations – probably surmountable, but challenging all the same. Of note regarding this Happiness Report, is its focus on “life evaluations” in ranking countries not “affect” – which we agree with.

DALYs been used to greatly advance our understanding of health loss internationally (the Global Burden of Disease study) and for New Zealand (see here for the Report and here for a very nice summary presentation on it by Martin Tobias). The DALY metric (and similarly ones such as health-adjusted life years [HALYs] that we are using in our research eg, on cancer care coordinators) also provide insights to health inequalities, which are of particular importance in the New Zealand setting.

So from a health and health inequalities perspective, it may be best for New Zealand policymakers to keep focusing on reducing health loss (particularly major causes such as mental health loss), while cautiously learning more about how policy might enhance measures of well-being more generally. It still seems too early for New Zealand researchers and policy makers to adopt the use of metrics like “WELBYS” (Well-being Years), a concept that the authors of this fascinating Happiness Report tentatively discuss.