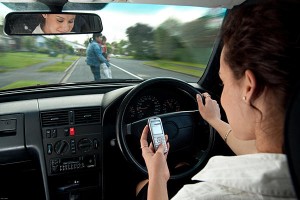 New Zealand still has a problem with the use of mobile phones while driving, even though a recent law may have helped somewhat. This blog discusses recent research and suggest ways to make further progress on reducing this persisting hazard.

In 2009 the NZ Government prohibited the use of hand-held phones while driving. In last Friday’s NZ Medical Journal (PDF available on request) we summarise the results of an observational study that was conducted with students and Waikato University colleagues into mobile phone use among Wellington drivers. The main findings were that out of 8335 cars observed at traffic lights and 9520 cars in moving traffic, the use of mobile phones was 1.9% (95%CI: 1.6-2.2%) and 1.3% (95%CI: 1.1-1.6%) respectively. The difference between these settings is not too surprising – people appear to be using their “spare time” at traffic lights to make or answer calls (even though their vehicle was often still in moving traffic at the lights).

Other notable findings were that younger drivers were significantly more likely to use their mobile phones while driving compared to older drivers. Also, it was much more common for drivers to use their phones in a “non-ear position” as for “texting” (at 78%), than next to their ear (22%) – especially in younger drivers. (More detailed results of our study are in online proceedings of a recent conference).

So did the law in 2009 actually work? Well it is difficult to interpret these Wellington results for 2012, relative to a pre-law study published in 2006 for Auckland. This Auckland study reported 3.9% of drivers using mobile phones while driving. Not only might there be differences in mobile phone use by location, there were differences in methods between the two studies. Nevertheless, the lower usage level found in the post-law Wellington study could suggest some partial effectiveness of the 2009 law. Although international data are somewhat mixed as to how effective such laws around mobile phone use by drivers are in the long-term, it does appear that they can be successful, especially if there is stringent enforcement (eg, see this study on Washington DC, USA).

Nevertheless, the current situation in NZ is still problematic, given the wealth of evidence for this hazard causing vehicle crashes. Indeed, driver distraction associated with mobile phone use may be getting worse, with greater ownership of attention-demanding smartphones and other nomadic devices. 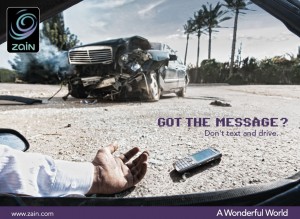 So what might the NZ Government now do? One approach is to continue with more government funded mass media campaigns around the hazard (as run during 2012). But are these campaigns the best use of resources? Ideally it would be good to have independent research on the effectiveness and cost-effectiveness of such campaigns. But it is possible that there are other options to be explored, including ones that we canvas in the NZ Medical Journal piece. One of these options could be a requirement that all new cars imported into NZ (eg, from the year 2018) could be required to have technology that automatically stops mobile phones in the vehicle from ringing when the vehicle is in motion. That is “smartcars” could automatically turn off “smartphones”.

Of course there should be further research on cost-effectiveness and also public discussions around additional strategies to determine a publicly acceptable mix of solutions. There will tend to be a trade-off made between reductions in crash risk and any reduced convenience for the public or increased vehicle costs. Nevertheless, it seems likely that such areas could fruitfully be explored as part of New Zealand’s ongoing efforts to further reduce the road toll.

0 Responses to “Mobile phone use while driving: Do we need smartcars that turn off smartphones?”