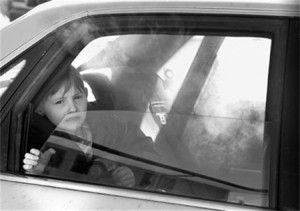 Today sees new rules to ensure children are safely secured in cars come into force, yet many remain exposed to hazardous second hand tobacco smoke (SHS) in vehicles. This blog ask why regulators are prepared to introduce regulation that protects children in the event of a car crash, but are unwilling to protect them from known toxins in tobacco smoke. All Australian States and the ACT prohibit smoking in cars with children present – why isn’t NZ, when the public supports this?

From 1 November 2013, all children must be secured in an approved restraint when travelling in vehicles until their seventh birthday, and seven year olds must continue to use a child restraint if one is available.1 The NZ Transport Authority explains that this will prevent deaths and serious injuries, and brings the country into line with international best practice.2

There is no doubt that requiring drivers to ensure children’s physical safety is protected in cars is highly desirable.  However, this rule change reveals a hole in the protection afforded to children travelling in cars and exposes inconsistencies in the government’s thinking.  While the government uses legislation in this area of child health, it prefers non-legislative measures to address the serious problem of smoking in cars carrying children.3

The most recent published statistics reveal nine children, aged 0-14, travelling as passengers were killed in car crashes and a further 502 were injured in the year to 31 December 2011.4 Starship Hospital data shows approximately one child per month is admitted to intensive care due to inadequate restraint.5

Ironically, the number of children whose health is directly jeopardised by smoking in cars is magnitudes higher. The annual ASH year 10 surveys reveal that nearly one quarter of 14–15 year olds were exposed to SHS during an average week (23% in 2012).6 These results indicate that over 13,000 year 10 students are exposed to in-vehicle SHS on a weekly basis, with the total number of children exposed likely to be well in excess of 100,000.7 What’s more, frequency of exposure is high – one quarter of year 10 students said they travelled in a smoky car every day, and a further half reported being exposed on three or more days.

The cumulative total health effects of SHS exposure raise important questions about why the government protects against one risk, vehicle crashes, but not another. Breathing the concentrated tobacco smoke that accumulates in the confines of a car has serious health consequences.8 Children are more susceptible to SHS because they inhale more frequently and have smaller bodies, and their weaker immune systems and growing bodies render them more vulnerable to tobacco-related diseases.9 Children exposed to SHS are more likely to suffer upper respiratory illnesses, asthma, otitis media (including glue ear), and sudden unexpected death in infancy (SUDI).10

Smoking in cars not only poses an immediate health risk, but can probably induce nicotine dependence11 and is an independent risk factor for later smoking uptake.12 This means that among children whose parents and friends smoke (factors with a known association with initiation), those who travel in smoky cars are even more likely to start smoking.6

Laws requiring cars carrying children to be smokefree are already common in many countries.13 Across the Tasman, all Australian States and the ACT (but not the Northern Territories) prohibit smoking in cars with children aged under 16 to 18 years (it varies by jurisdiction), with those drivers who breach the law risking spot or court fines. Many US states and Canadian provinces have similar laws, and ten other countries either have or intend to follow suit.

As often happens with public health policy, the government is not keeping up with the public’s opinion and desire for action.  There is very high support for implementing this restriction, both here and overseas.14 A recent representative poll found 88% of New Zealanders agree that smoking should be banned in cars when children are present.15 The survey found four out of five smokers support this proposal (78%), showing most accept the ‘individual choice’ argument is not valid because the children don’t have a choice about avoiding exposure.

The new car restraint rules are predicated on protecting children from avoidable harms, but it is anomalous not to address the harm caused by SHS too.  In this regard, we are not keeping up with international best practice, and this failure to act maintains an unnecessary barrier to achieving our world-leading Smokefree 2025 goal. Simply telling drivers to use their discretion around not smoking fails to recognise the force of nicotine addiction and sends an unnecessarily ambiguous message about the serious health hazards of SHS. A law protecting children from smoking in cars in NZ needs prompt attention now. 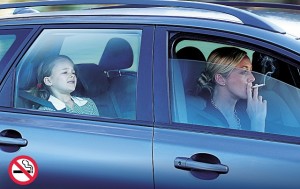