This blog considers the results in more detail (for all ethnic groups combined, as Māori data is not yet on the Statistics NZ website), and asks what else could be done to accelerate progress towards a smokefree nation. 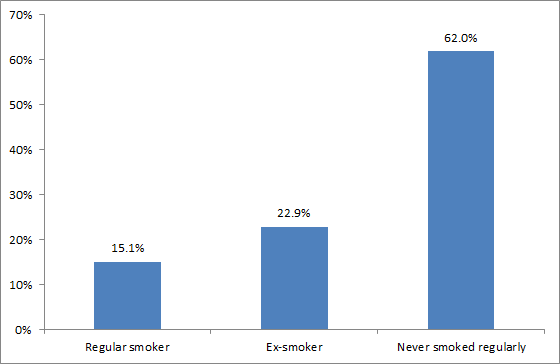 Statistics New Zealand has released Census data today showing that were 463,000 current smokers on Census night in March of 2013.  That is a fall in the absolute number of smokers of 22.6% since 2006 – ignoring those people not replying to the smoking question.  Allowing for modest growth in the adult population between censuses, that is a 24.4% fall (or a 4.4 percentage point fall) in the smoking prevalence.

Are these results credible?

The new results seem credible given the decline in national tobacco sales (from 2.52 million kg in 2006 to 2.07 million kg in 2012, see these data). They also fit with marked reductions in youth smoking rates (from school surveys) in the last decade or so.  There is also some consistency with declines measured in national health surveys, though these have shown more limited reductions. That is, adult smoking prevalence ‘only’ fell from 19.4% (95% confidence interval 18.5% to 20.3%)  in the 2006/07 New Zealand Health Survey to 17.8% (16.8% to 18.7%) in the 2011/12 Survey.  Finally the results are consistent with the international evidence that various forms of tobacco control are effective at the community level – including such interventions used in NZ of: 10% per annum tax rises, extensive Quitline activity and DHB smoking cessation support.

But on a more cautionary note, if a third of those who did not give an identifiable response (or any response) to the smoking question in the Census, did actually smoke regularly, then the true prevalence would be a bit higher at 17%.

How to accelerate progress to Smokefree 2025

But how might progress be accelerated, to ensure a high probability of achieving the Government’s Smokefree 2025 goal (of <5% smoking prevalence)? Some ideas for the top priorities, informed by our reading of the international literature, are as follows:

All these interventions are likely to be relatively low cost to implement ie, the cost of a law with potentially some monitoring and enforcement costs. Probably the big cost is the “political will” that would be required, although these moves could be reputation building for political leaders (this was the case in Australia where the government won against the tobacco industry on plain packaging).

Other options, but ones which may require more upfront expenditure by government (if not funded by dedicated tobacco taxes) include:

Ideally good research, including modelling work and cost-effectiveness analyses, will better inform the optimal mix of tobacco control approaches. Nevertheless, there is already a very strong public health case for adopting many of these interventions given the current scale of harm from the tobacco epidemic on the health of New Zealanders.