A clever study just published in the Bulletin of the World Health Organization has analyzed how changes in fast food transactions per capita within 25 high-income countries was associated with changes in body mass index (BMI).  The change-change analysis is important, as it addresses confounding bias that plagues many studies.  The study found that an increase of 10 fast food purchases per person per year is associated with increases in BMI by 0.33 units (or 1 kg for an average height person).  Of note, the increase of 10 fast food purchases per person per year was exactly that observed for NZ during the 1999 to 2008 period covered by this study.

The study also suggests that much of the increase in fast food transactions was due to market deregulation.  Thus, the authors point to global market forces opening the door to fast food companies, leading in turn to an important driver of the obesity epidemic.  That is, a market failure – if you believe that increasing obesity rates is not what the average citizen wants as an outcome of deregulated markets.

In the rest of this blog I will address the study strengths and limitations a bit more.  But if you are not interested in the detail on the methods, then just jump to the bottom of this blog post for ‘Implications’.  And see TV interview of Boyd Swinburn and another one by Tony Blakely talking about this paper in the last 24 hours.

The Figure below is taken straight from the study.  The 25 countries included are plotted on the graph.  The x-axis shows the increase in fast food transactions per person over the ten years of the study – NZ increased by 10.  The y-axis shows the increase in BMI – NZ increased by just over 1.0 BMI units.  So, this change-change figure immediately gives a strong impression of a robust association. 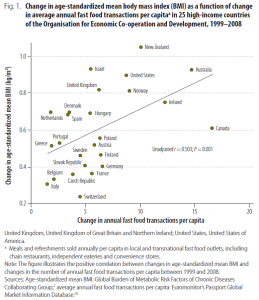 Next, the authors undertook something called fixed effects regression, which (by design) adjusts for all confounders that differ between countries, and adjusted for measured time varying potential confounders (e.g. GDP, percent living in urban areas).  The result was a 0.033 (95% CI 0.013 to 0.052) increase in BMI for each 1 unit increase in fast food transactions per capita.  Or what I have converted to a 1 kg increase in body weight for an average height person, for an increase of 10 fast food transactions per person.

Finally, the authors also looked to see whether sugary drink consumption, total caloric intake or animal fat explained why increasing fast food transactions is associated with increasing BMI. (I.e. is it the Coke, the Big Mac, or the whole Value Meal?)  Interestingly, they find that sugary drinks make a small contribution – small only, but consistent with a range of other evidence.  However, there was no mediation by total calories or animal fat – contrary to expectation, and weakening the findings a little.  However, it might just be that total calories and animal fat was mis-measured so much in the data available, that this variable was not reliable.

This study is not definitive – indeed, studies rarely are.  The above fat and calorie result erodes the coherence a little.  There may be other unmeasured variables that changed over time with countries, and which make this observed association spurious.  And one can always quibble about whether the instrument variable was truly a good instrument variable.  However, I think we have to conclude that the study is pretty robust and policy makers should give its findings some weight.

Free markets and capitalism are mostly good.  They get us flat screen TVs and other desirable commodities, and – relevant here – year round access to fruit and vegetables as well.  But free markets also have failures, such as the obesity epidemic.  Does this mean that we should tighten the reins a little on market freedoms around fast food – just as our society does already with tobacco, alcohol and thousands of consumer products covered by safety regulations (from car design to fire safe children’s pajamas)?  This might make sense – given we know society is generally concerned about obesity, diabetes, heart disease and cancer. It is also concerned about the impact of chronic disease burdens on the tax-payer funded health system.

So what are some of the intervention options to address this ‘market failure’?

Some will view these measures as ‘nanny state’.  But if society wants to have a healthier population, and protect the long-term financial viability of its publicly funded health system, then society can justifiably curtail deleterious and unintended consequences of the free market.