There is no doubt that NZ needs to keep addressing ethnic inequalities in health as an important priority. Nevertheless, gender inequalities may also be worth some consideration given that NZ men have lower life expectancy than women by four years. This blog summarises key data and considers the major risk factors determining poorer male health. It then discusses if there is a plausible case for shifting more of the available health resources towards improving male health. 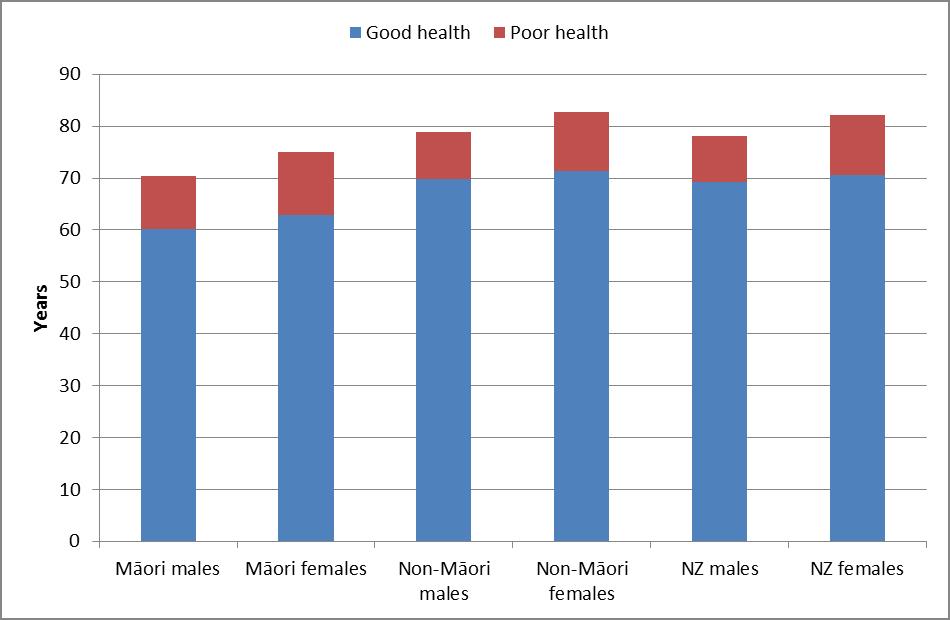 Figure: Years of life lived in good and poor health (based on data in: Ministry of Health 2013)

The key data has been produced by the Ministry of Health in a Major Report on health loss published last year. From the tabulated data the above graph has been prepared for this blog to show differences by gender and ethnic group. For males overall, the life expectancy difference (in 2006) was 4.0 years less than females. However, males lived an average of 1.4 years less in poor health (8.9 years vs 11.5 years). In other words males spend a slightly higher proportion of their shorter lives in good health, than do females (89% vs 86% of their lives).

The Ministry Report detailed the higher injury burden among male youth (aged 15–24 years) and, to a lesser extent, among young adult males (25–44 years). In the next oldest age group (45–64 years) cardiovascular disorders are a key driver of the sex difference (eg, heart attacks). Among older adults, the most prominent sex difference is the greater burden of cancers in males (whereas in this age group females have more musculoskeletal disorders).

In terms of specific risk factors, the following were identified in the Ministry Report:

Do these differences in life expectancy matter much?

Probably “no” from a simplistic utilitarian perspective. Or only to a small extent given that the gap in healthy life is relatively small between the sexes. But perhaps a “yes” if the following are considered:

It would be good if these arguments were studied and voted on by a citizen jury composed of a random selection of NZers. Nevertheless, at first glance the above arguments seem to provide a reasonable case for doing relatively more to address poorer male life expectancy in NZ.

What could be easily done to increase male life expectancy in NZ?

Fortunately there are a range of possible population-level interventions that could be used. Because of the higher risk factor prevalence and disease rates among males, the same intervention across the population should have a relatively bigger impact on males than females. Examples of such interventions include:

The above strategies would be likely to also benefit female health, but probably not as much as male health (relatively speaking). Also of note is that some interventions could be cost-saving to society eg, particularly raising alcohol tax and regulating maximum salt levels in food. So perhaps some of these interventions could be described as being win/win/win – ie, a particular win for male health, an additional win for female health, and a collective win for reducing costs for the health sector.