Compared to a ‘normal’ body weight (BMI 20-<25), being obese (BMI ≥ 30) is associated with a 69% higher coronary heart disease death rate and a 47% higher stroke death rate [1]. The same excess rates for overweight (BMI 25-<30) are 26% and 13%, respectively. In this blog, we look at a recent combined analysis of 97 studies on how much of the overweight/obesity association with cardiovascular disease (CVD) deaths is due to high blood pressure, cholesterol or glucose [1], and what this means for how health policy can address the obesity epidemic. We also reflect on a seminal paper on BMI and mortality by the late Gary Whitlock.

Being overweight or obese doesn’t just cause CVD on its own; rather it changes other metabolic risk factors or mediators that then effect disease processes. Being overweight and obese means you are more likely to have higher blood pressure, higher cholesterol and higher blood glucose – and all these things in turn cause higher coronary heart disease (CHD) and stroke rates. Which is where this latest study published in the Lancet [1] comes in. This paper finds that blood pressure was the most important mediator, alone explaining 31% of the association of overweight/obesity with CHD and (an impressive) 65% of the association of overweight/obesity with stroke. Combined, blood pressure, cholesterol and high glucose explained 46% and 76% of the excess rates of CHD and stroke arising from overweight/obesity. Results are in the figure below [and further text is below the figure]. 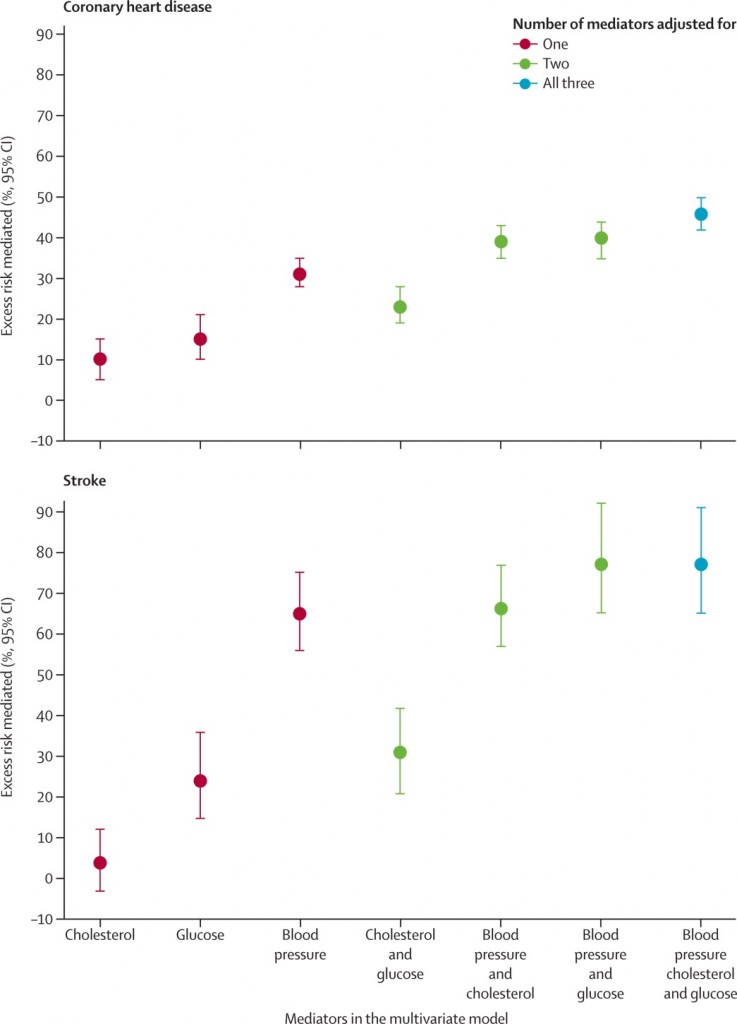 So what? Quite a lot really. First, this type of analysis reminds us that the association of overweight/obesity with disease will vary by context – a society with very low blood pressure (e.g. due to low salt intake) is probably not going to have as much of a stroke burden due to overweight/obesity.

Second, and thinking in terms of intervention options, this means we have at least three different ways to address the overweight/obesity disease burden:

The good news is that none of the above are mutually exclusive and so society should perhaps be aiming for an optimal mix in terms of practicality and cost-effectiveness. Nevertheless, we suspect that primary prevention (i.e. preventing excessive body weight in the first place) should probably be the dominant approach, and is likely to be the most cost-effective strategy overall. It may also be the best way to reduce health inequalities arising from obesity – since it does not generally depend on access to the health system.

The above study – along with many others – clearly demonstrates the CVD burden of overweight/obesity. However, it would be remiss to not point out some remaining controversy about whether being overweight (i.e. BMI 25-<30; as opposed to obese) is actually associated with any/much increased all-cause mortality. Flegal and colleagues have reported little if any increase in mortality when moving from a BMI of 20-25 to a BMI of 25-<30 [2,3]. Indeed, in a 2013-published meta-analysis of 97 studies, Flegal and colleagues found that people with a BMI of 25-<30 had a mortality hazard ratio of 0.94 (95% confidence interval: 0.91-0.96; i.e. a 6% lower mortality rate). How might this be?  Two possibilities are more active preventive treatment (e.g. blood pressure lowering drugs) occurring among overweight people, and possibly beneficial effects of ‘energy reserves’ in the face of a life-threatening disease. A possible ‘spurious’ reason is the role of ‘reverse causation’ whereby people with life threatening diseases had lost weight to be in the ‘normal’ BMI range, thus causing a spuriously lower mortality rate among overweight people.

The late Gary Whitlock’s (1964-2013; New Zealand-born and trained epidemiologist) led an impressive combined analysis of studies (i.e. combining individual-level data from studies, not just combining results of studies) in one of the most thorough analyses yet of BMI and mortality [4]. They found that for just about all diseases mortality increased moving from normal to overweight. Moreover, they carefully excluded early follow-up time to overcome possible ‘reverse causation’ whereby pre-terminal disease has caused a decrease in body weight giving rise to a spurious decreased mortality risk among the overweight category.

Life expectancy in countries like NZ will probably still keep rising despite some setbacks from the obesity epidemic. But if as a society we want to increase human longevity even further – and in particular decrease the large morbidity and health system cost burden of obesity – it will be important to act on this major issue of our times. That action can be to prevent overweight/obesity in the first place, prevent risk factors that obesity tends to work through (e.g. reducing population blood pressure and cholesterol), and also treat people who are obese to reduce their other CVD risk factors. We have published and blogged previously on one possible approach – to tax sugary soft drinks (see letter on effect of soft drink tax) and cautiously explored other options for food taxes and subsidies.

1. The Global Burden of Metabolic Risk Factors for Chronic Diseases Collaboration (BMI Mediated Effects). Metabolic mediators of the effects of body-mass index, overweight, and obesity on coronary heart disease and stroke: a pooled analysis of 97 prospective cohorts with 1·8 million participants. The Lancet 2013.