The fact we are living longer is well-known, as witnessed by discussions such as those around the retirement age and superannuation policy. But few are aware just how dramatic the changes in cause-specific mortality have been in the last century. We are publishing a book later this year (The Healthy Country? A History of Life and Death in New Zealand; AUP) that looks in depth at the fascinating story of mortality decline in New Zealand. The path to low mortality that this country followed was unique in many ways. For example, did you know that New Zealand (non-Māori) had the highest life expectancy in the world from 1870 to 1940? Or that life expectancy for Māori rose by 20 or more years between 1900 and 1950? To find out more, read the book! In this blog we whet your appetite by looking at some data just released by the Ministry of Health on trends since 1945 in cause-specific mortality. 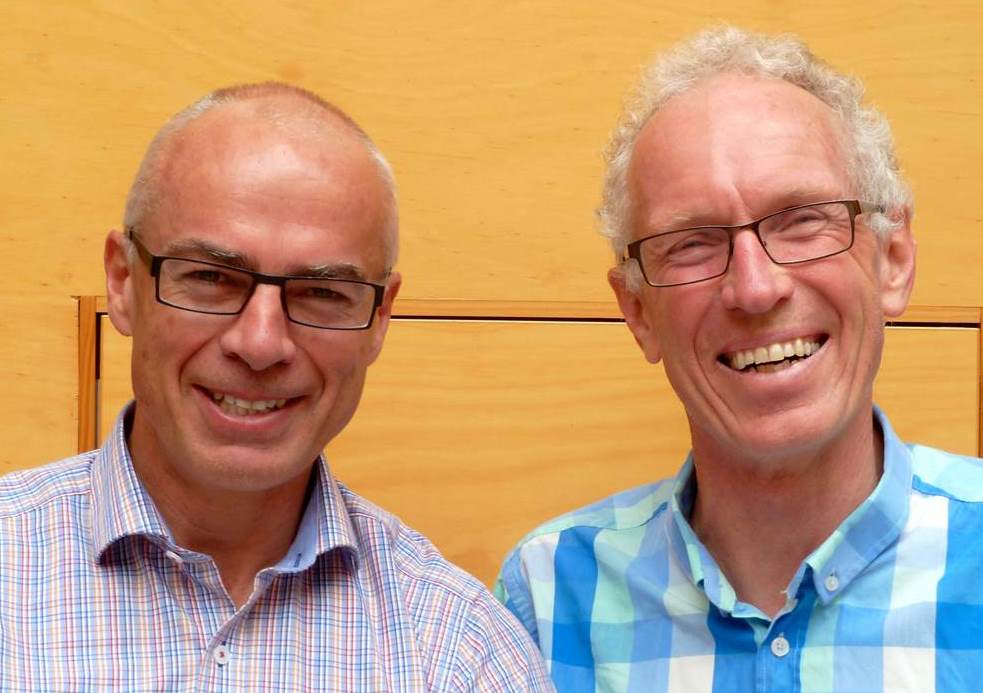 Alistair Woodward and Tony Blakely are publishing a book The Healthy Country? A History of Life and Death in New Zealand in October this year. Here they blog about recent Ministry data on falling mortality rates

The graph below shows cause-specific mortality or death rates, sexes combined and age standardised. There are stunning changes. Ischaemic Heart Disease (IHD; ‘heart attacks’) peaked c.1970 (think peak tobacco and saturated fat at the time), and has since fallen nearly 80% with no apparent slowing. This is a tremendous joint success of both prevention and better treatment (they each can claim about 50% of the success). But it is also interesting to ponder in light of the obesity epidemic. Some fear that heart disease rates will rise again as the obesity epidemic takes hold; what is more likely is that the obesity epidemic will slow the rate of decline somewhat. 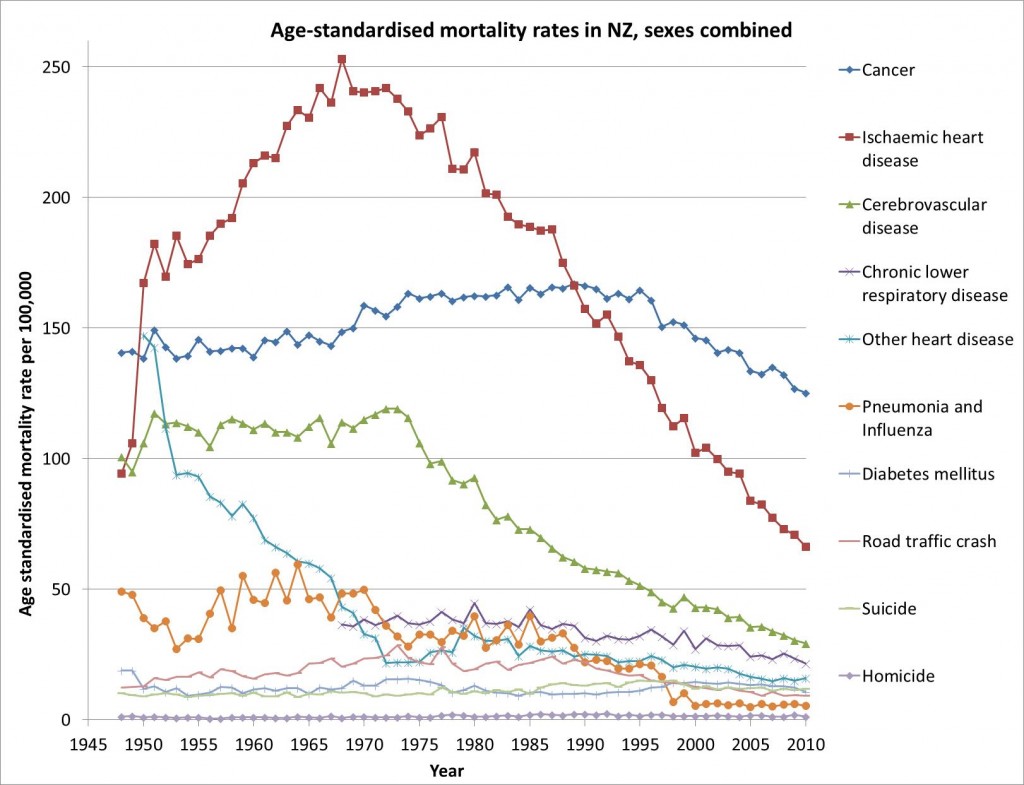 Cerebrovascular disease (CVD; stroke) has fallen remarkably as well – not surprising as stroke and IHD tend to travel together due to shared risk factors. Overall we have seen a major shift from cardiovascular causes to cancer deaths.

Ask most people on the street what is happening with cancer rates and they will say ‘going up’. That may or may not be true for incidence (i.e. getting cancer in the first place). This varies tremendously by type of cancer with new cases increasing for blood cancers like leukemia, but decreasing for stomach cancer. But mortality from all cancers combined (age-standardised) has been falling since the mid-1990s. Again, this is due to a mix of changing incidence (remainder of report can be found here) (prevention) and improving survival (treatment and early detection).

Beneath these ‘big three’ causes of death are diseases like diabetes. Diabetes probably accounts for far more deaths (e.g. many IHD will be due to diabetes), so we have to treat this trend circumspectly. Hard to see in the figure, but important, is the trend line for road traffic crash deaths. This is important because it impacts on younger people (hence causing more years of life lost, as does suicide), and there have been dramatic falls since the early 1970s – mainly due to prevention, but also in recent years to improvements in treatment (e.g. helicopters to surgical technique).

The sum of all this is all-cause mortality, sometimes described in terms of life expectancy at birth, which has been increasing at a rate of 2.5 years a decade – or 6 hours a day.  Staggering. And New Zealand does not do too badly in international terms. Last week the WHO released the annual World Health Statistics – New Zealand males ranked 6th in the world at 80.2 years (Iceland was top at 81.2, Aussie 3rd at 80.5). New Zealand females were out of the top ten (84.0 years), with Japanese women leading the world with an impressive 87.0 years.

So what? Quite a lot really. We are living longer, which must rate as one of the biggest successes of society in the last 100 to 200 years. What is killing us is also ‘changing in our own times’. Stroke and IHD are a shadow of their historic force, but will not completely disappear without even greater investments in prevention and treatment. The downward momentum is well established and (we believe) unlikely to be reversed by the obesity epidemic (rather slowed).

But what exactly should we be aiming for? Is a life expectancy of 80 (or 90, or 100) enough?  Should society be refocusing its efforts in different directions? Do we need to pay more attention to quality of life? (Assuming there is a trade-off of quantity and quality – which isn’t altogether clear.) Economists may argue we need to prioritise productivity of those nearing retirement in order to support the aging population. Others propose that we review what is meant by “productivity”, to capture more accurately the contributions that older individuals make to society. And the big one – can the planet sustain our public health successes? Unless consumption patterns change radically, one might question the ecological ethics of lowering human mortality rates further and further.

We will consider these issues in future blogs – and, of course, in our forthcoming book.